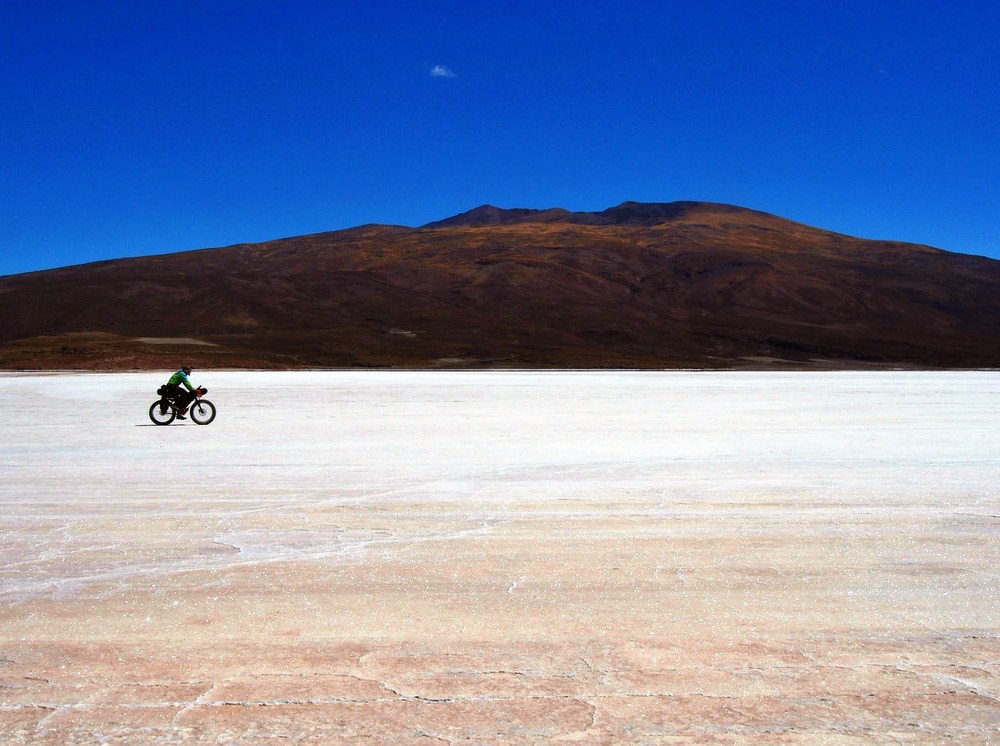 As the dirt road peters out, the crunch beneath our tyres signals our entry in to the Salar De Uyuni, the world’s largest salt flat. A vast white expanse of nothingness, measuring over 12,106 sq km.

Under the dazzling light our eyes begin to adjust. Stopping for a moment we gaze ahead, the scale difficult to comprehend as the horizon bends to meet the clouds. Unsure whether it is a reflection from the shimmering white surface or the sheer scale of this natural marvel. 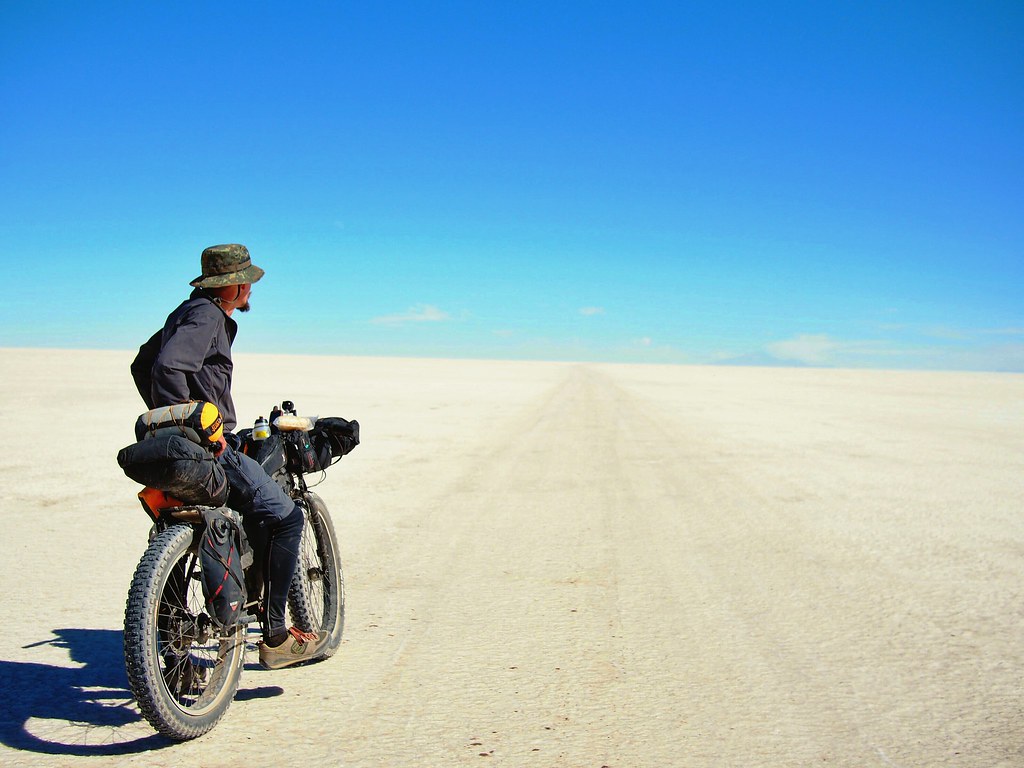 As we turn our pedals each of us is absorbed in our own personal thoughts, as we attempt to comprehend the scale and vastness before us. Slowly adjusting to the unfamiliar surroundings which envelope us for two days of cycling. 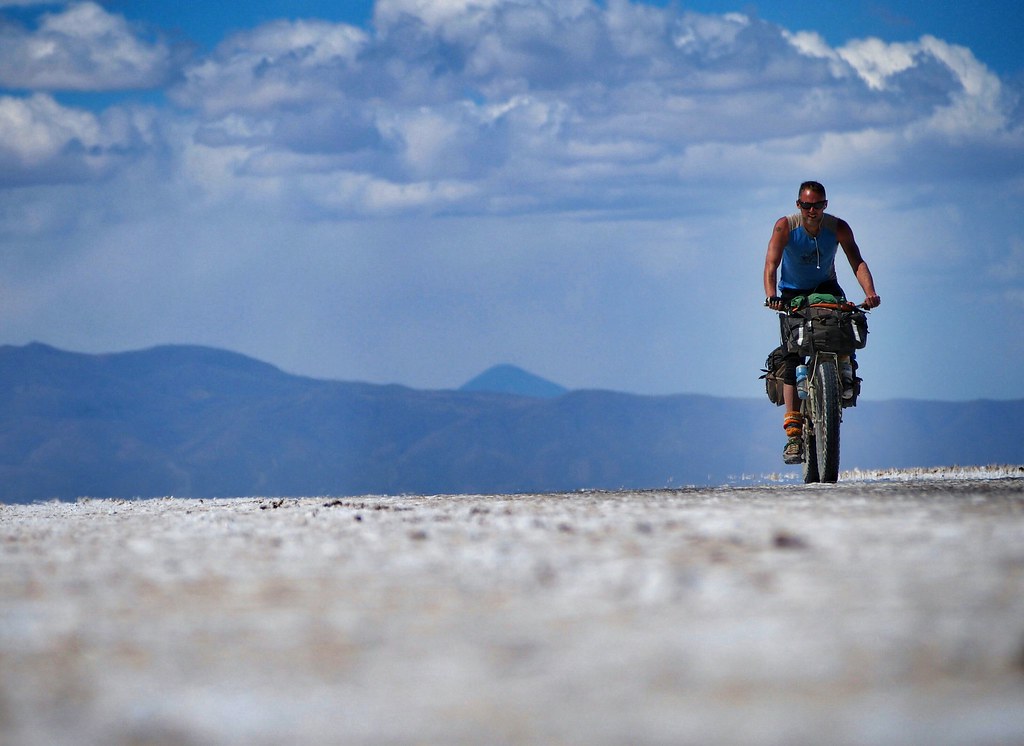 The characteristic hexagonal shapes of Salar De Uyuni provide many photo opportunities each seemingly better than the last. 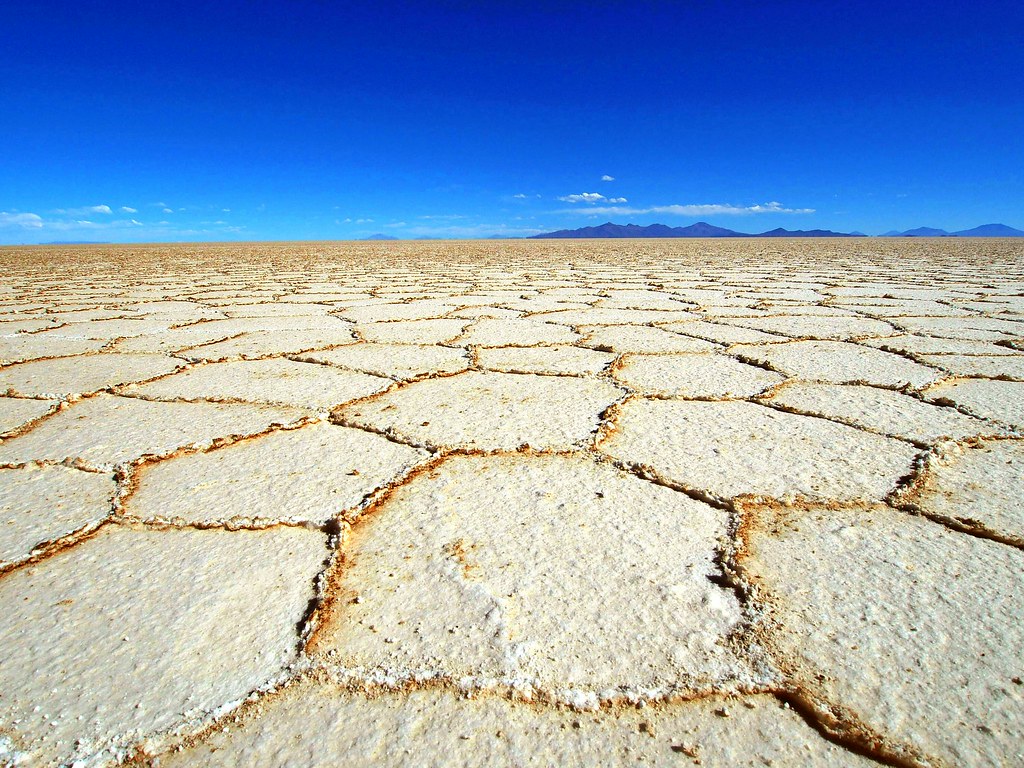 Arriving at Isla Incahuasi we watch the sun drop, and salt crystals glimmer like diamonds as the last of the sun’s rays catch them before the sky glows pink. 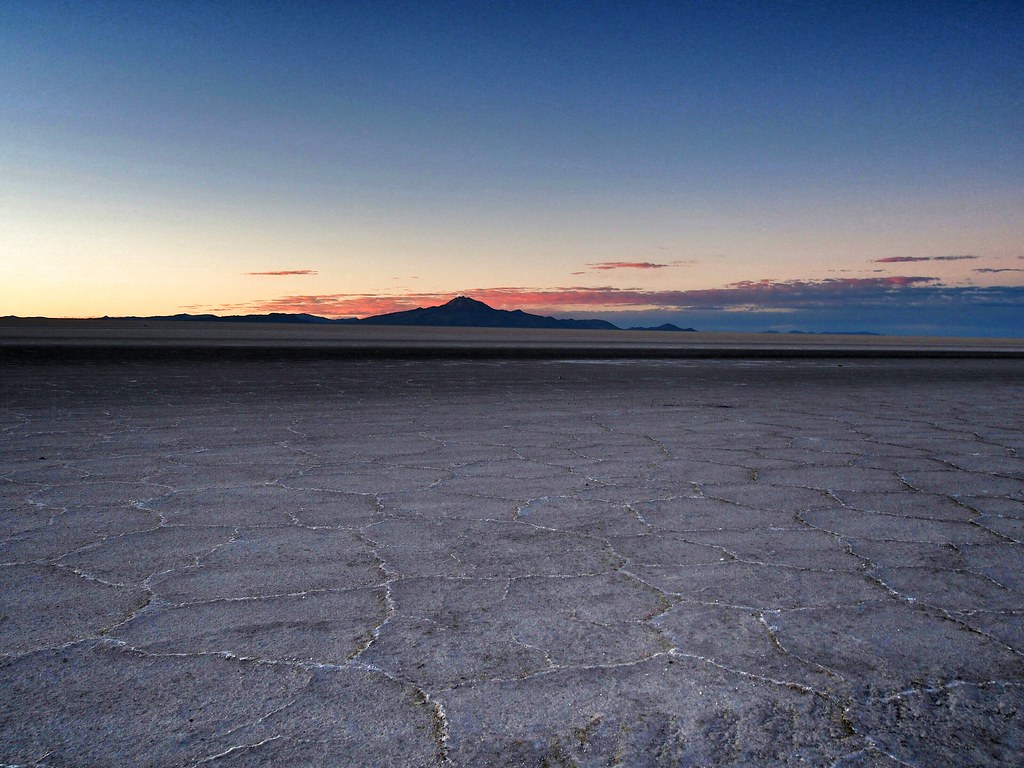 As the last of the tourist jeeps leave, we ride on to find a campsite at the edge of the Salar. 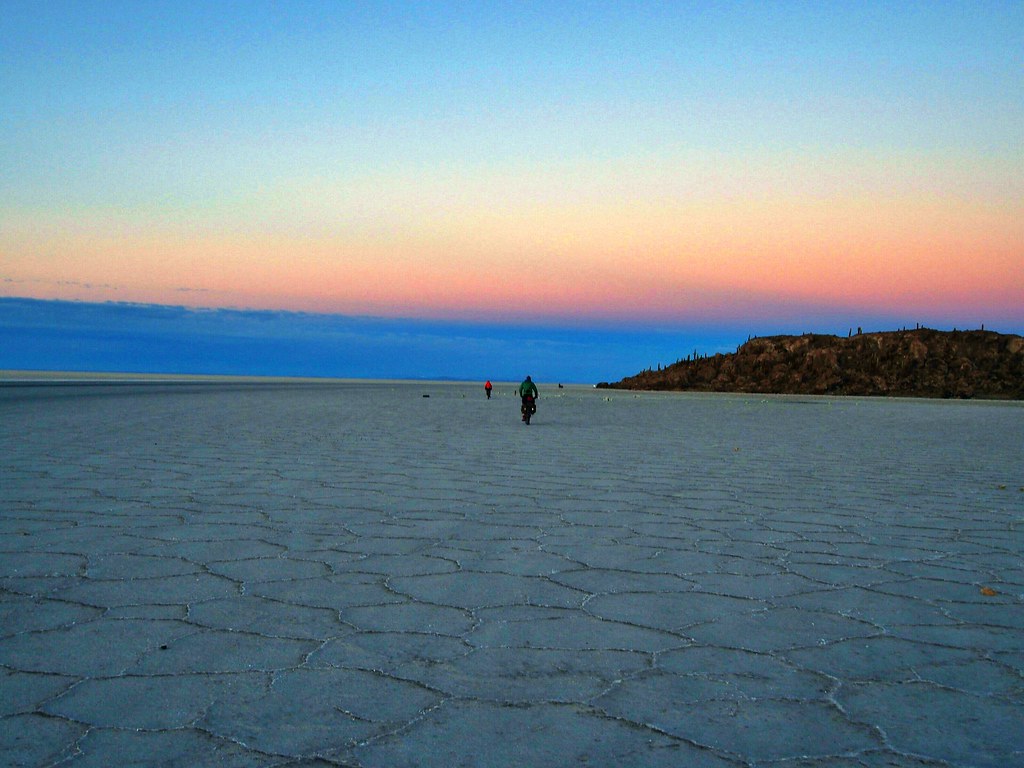 Looking up to the night sky, stars twinkle and constellations leave us slack jawed at their clarity. In the distance we watch as electrical storms flicker and illuminate the sky, their proximity difficult to judge. 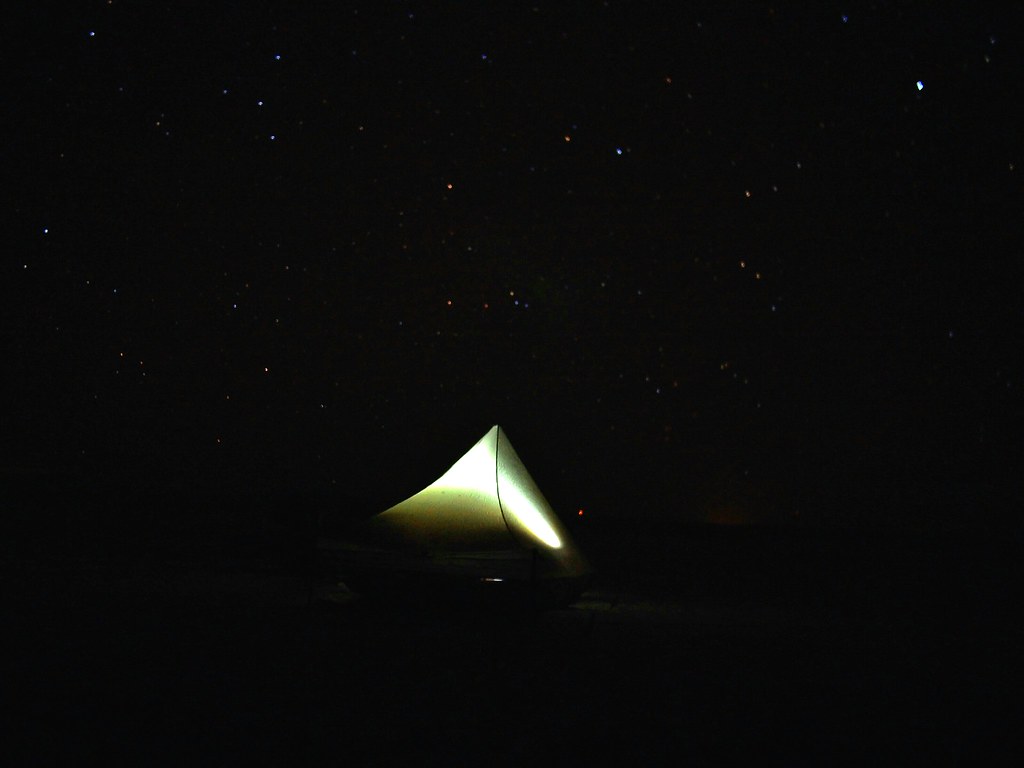 Riding on the following morning we reach a quieter side of the Salar away from the buzz of tourist jeeps. 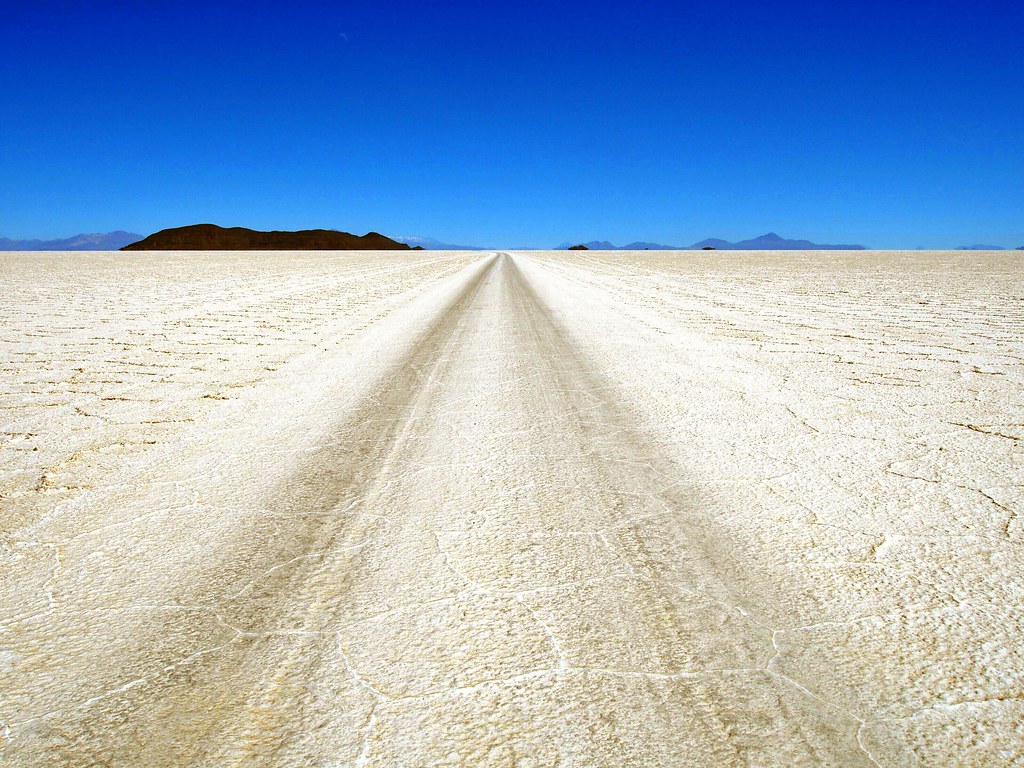 Its easy to think we alone, yet there are other adventurous travellers like us. A French family from Grenoble with two children aged 2 and a half and a 5 years old. 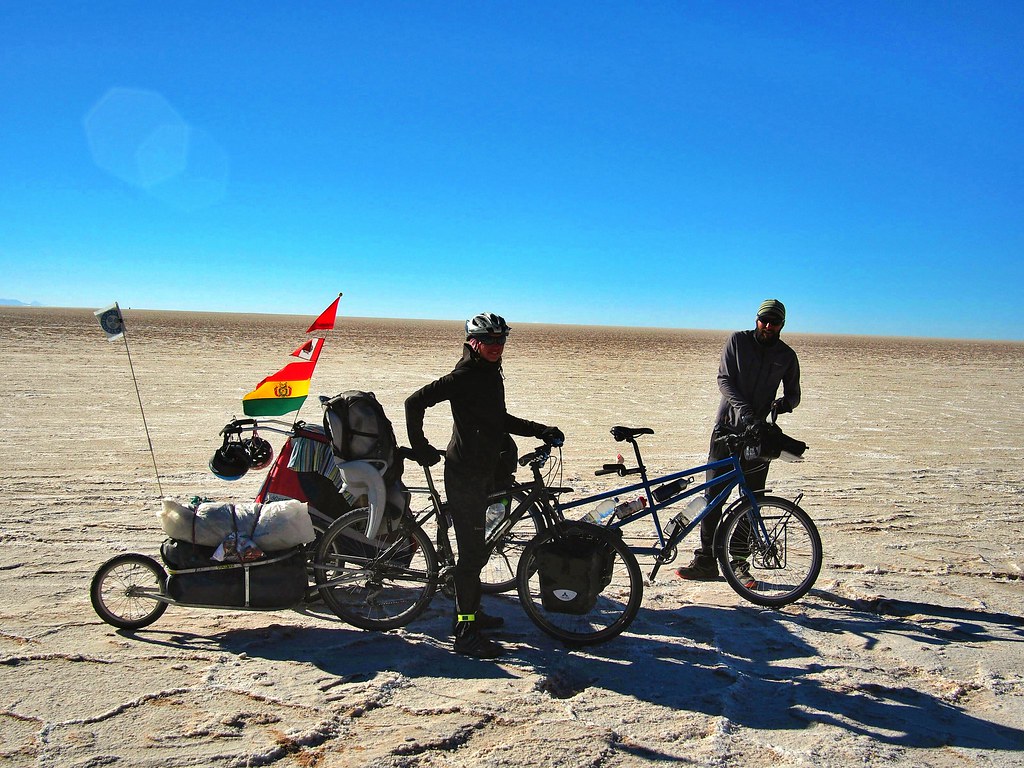 An Italian couple, Nordic Walking the length of the Salar. 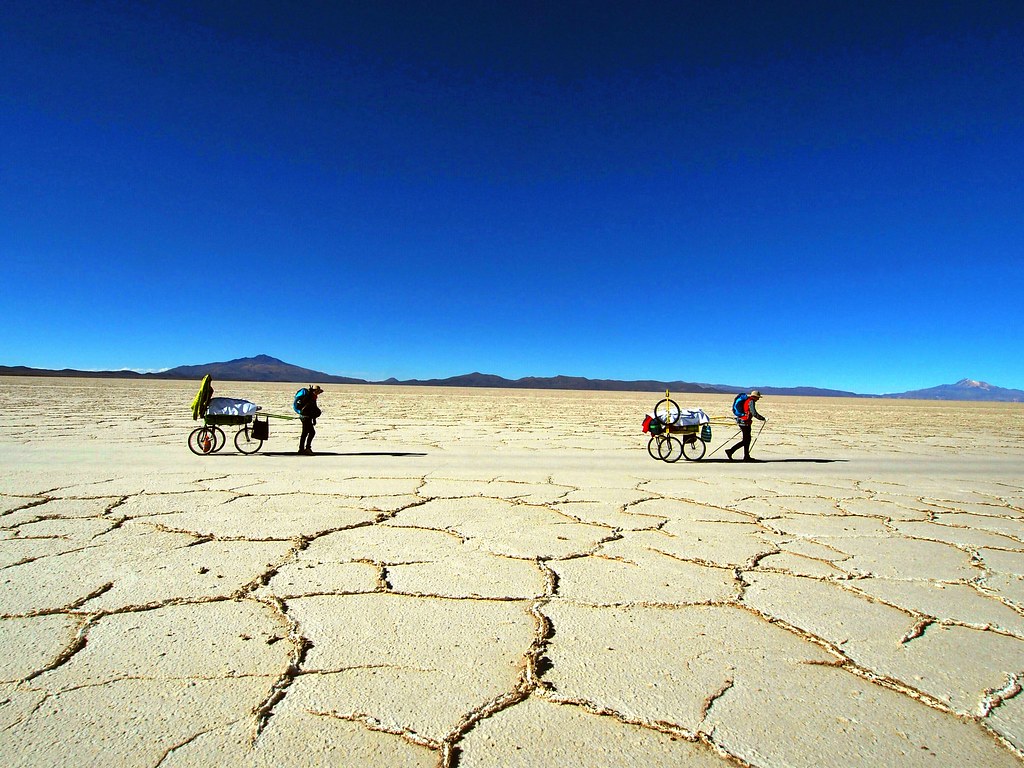 Passing through the town of Lliac we a treated to the closing ceremony of a two week fiesta. Tone deaf bands, slurring drunks and festivities continue on until the early hours which see us depart the town as bleary eyed as many of the locals.

Leaving town we head to the Salar De Copiasa, along the way we pass a pen of inquisitive Llamas who want a stroke and nuzzle. If only they didn’t taste so good…. 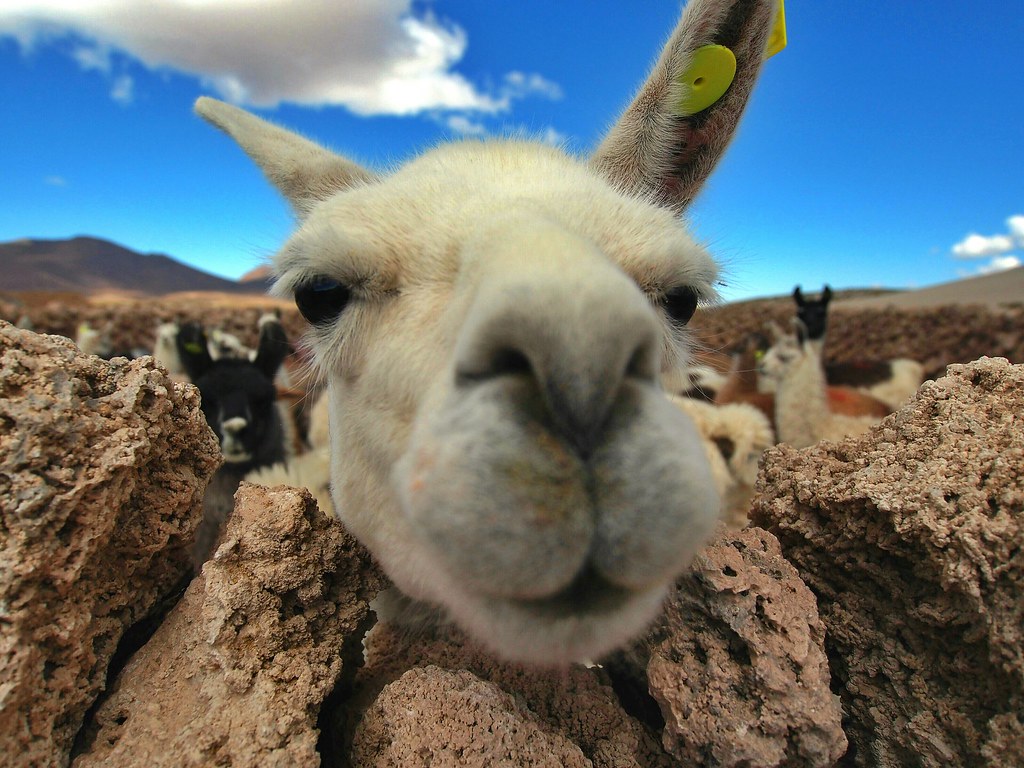 Clouds pop from the sky. 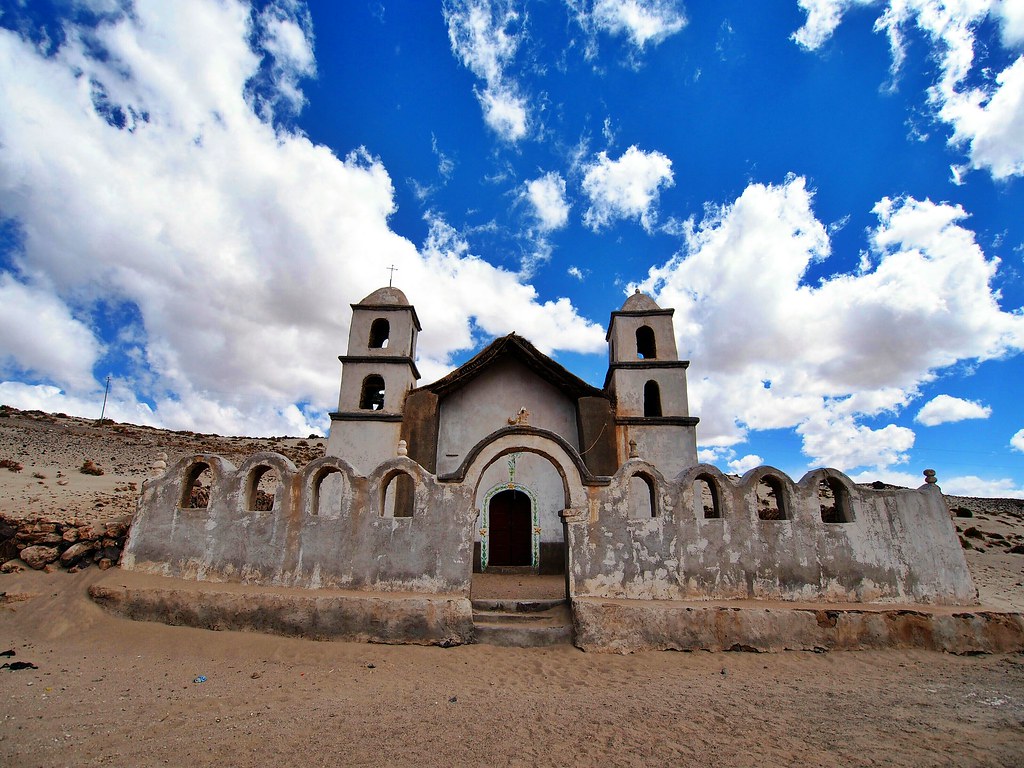 As we approach the Salar De Copiasa, we remember some advice we are given. Cass got the wrong idea when they said “carry a stone to knock the tent pegs in”. 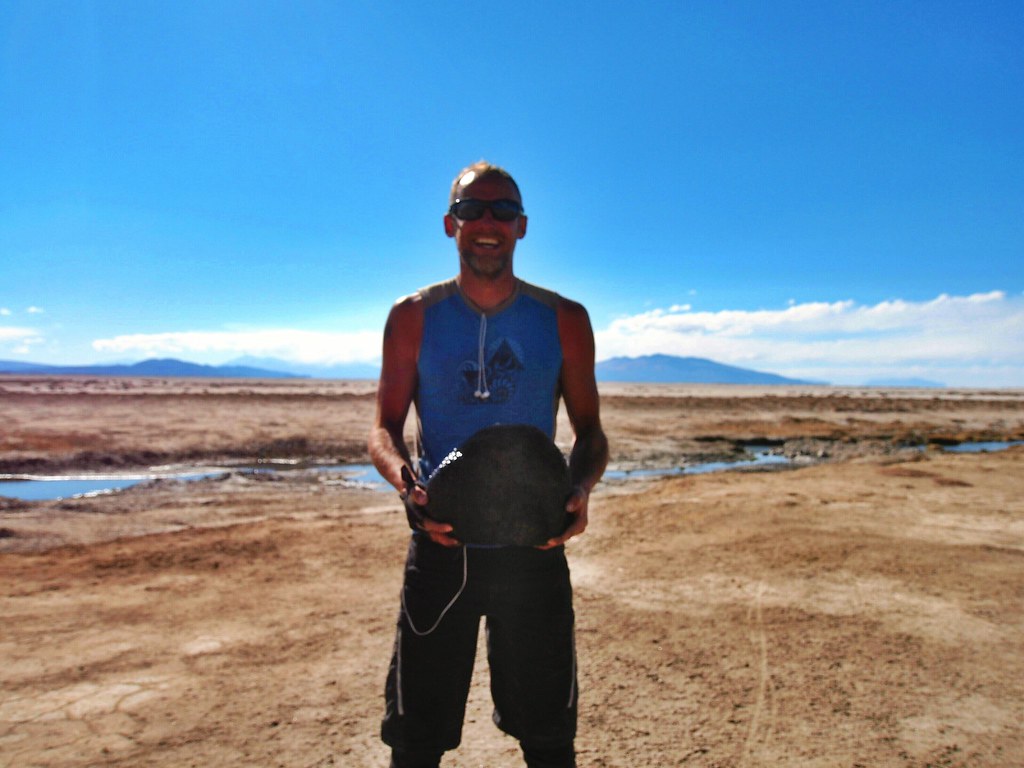 We blaze a trail heading directly to the Salar before eventually grinding to a halt. 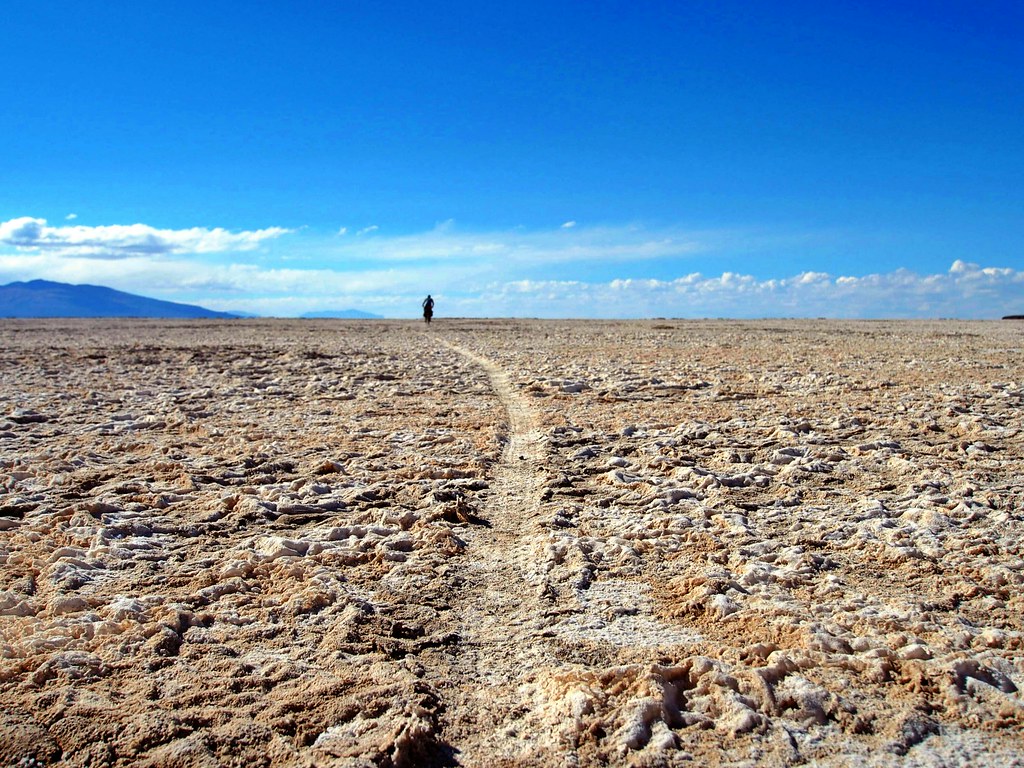 Back tracking we find a more sensible route. 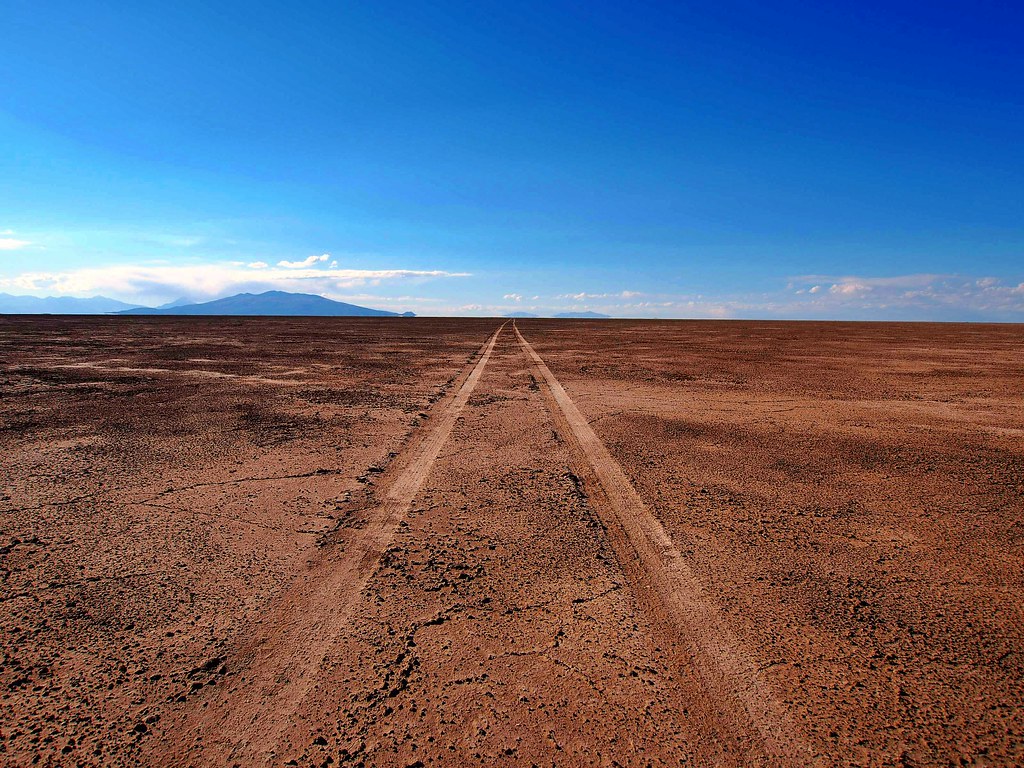 Introducing the latest in Bolivian leg wear. Who said leg warmers were for girls? 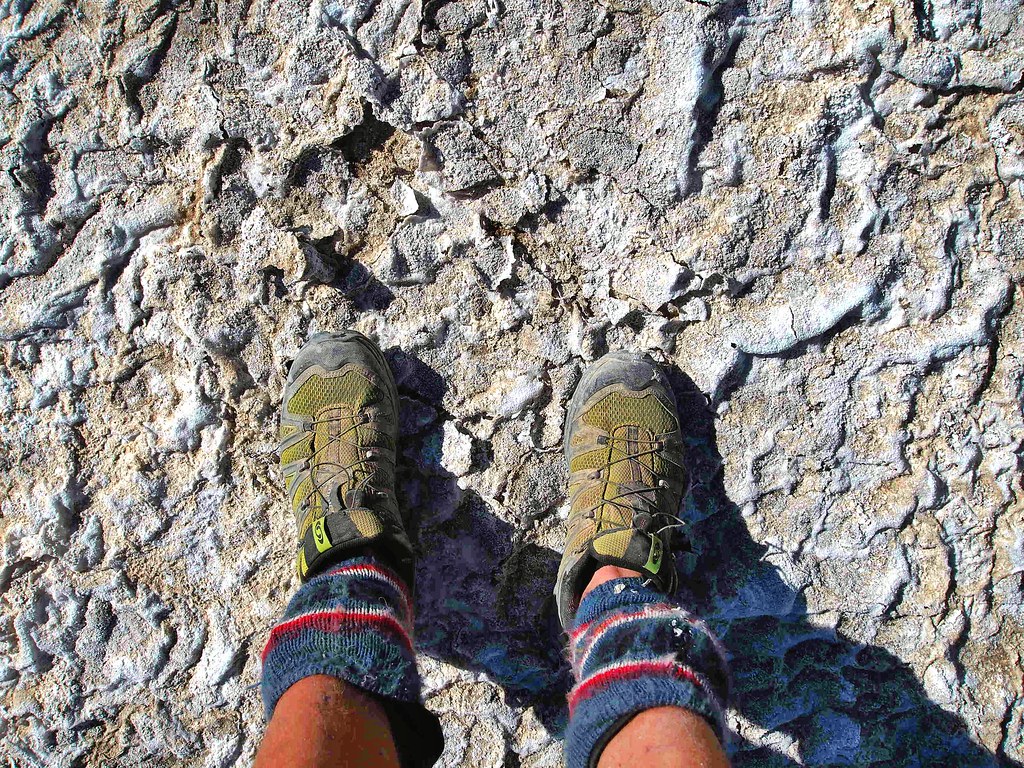 Circled by volcanoes the Salar De Copiasa is dimuntive in comparison to its bigger brother, yet it’s compact nature has a more tangible feel. 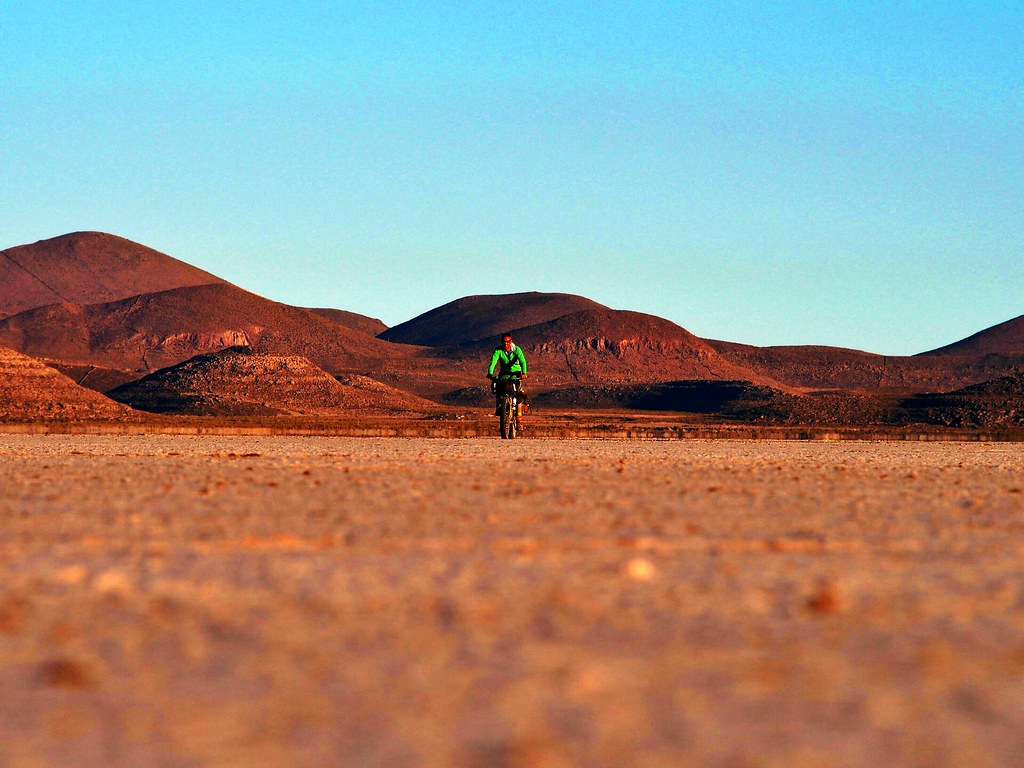 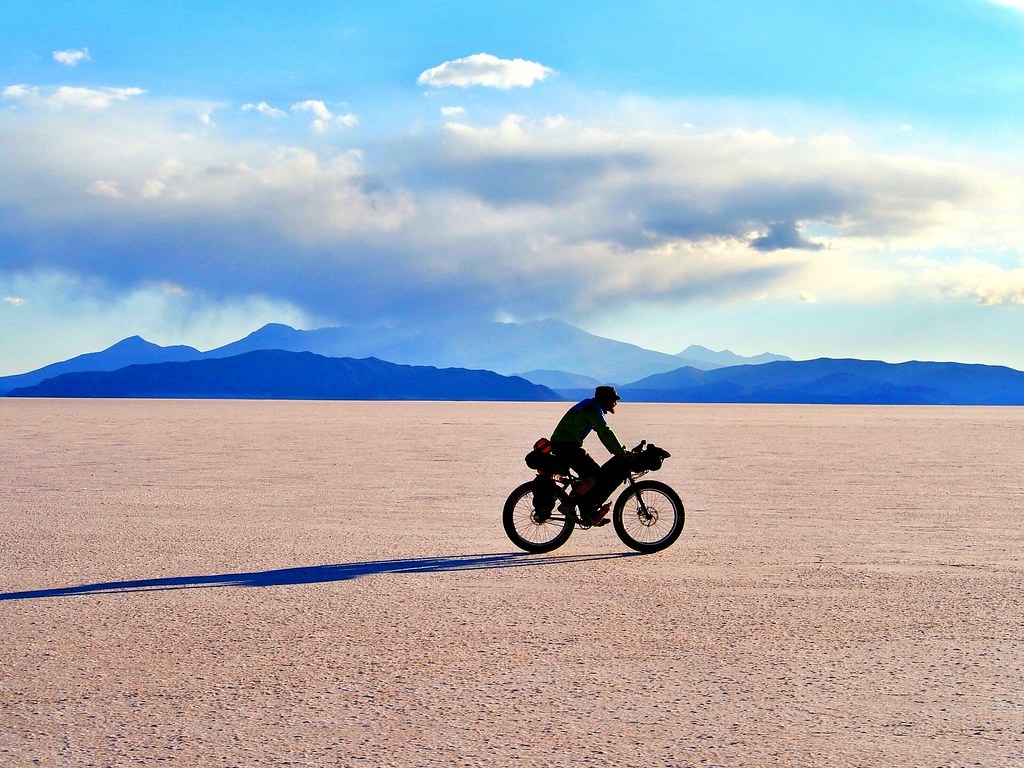 Before selecting a prime camp spot out on the Salar. With little shelter, the tail wind we have enjoyed for the afternoon now becomes a headache as we pitch the tents and hope that the wind does not change direction over night. 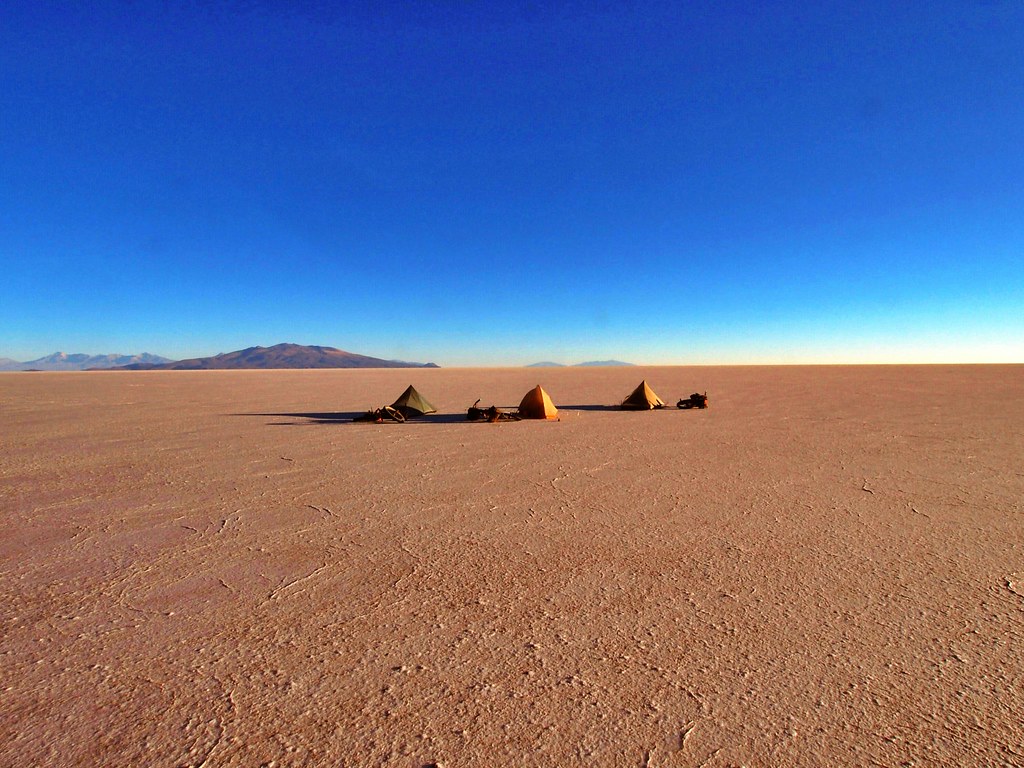 Riding across the Salar the following morning we take it in turns to shut our eyes and continue riding. As the time increases we begin to count in minutes.

Seemingly minor corrections see us veering off in differing directions much to the delight of each other. As we open our eyes we hastily look around for our compadres. 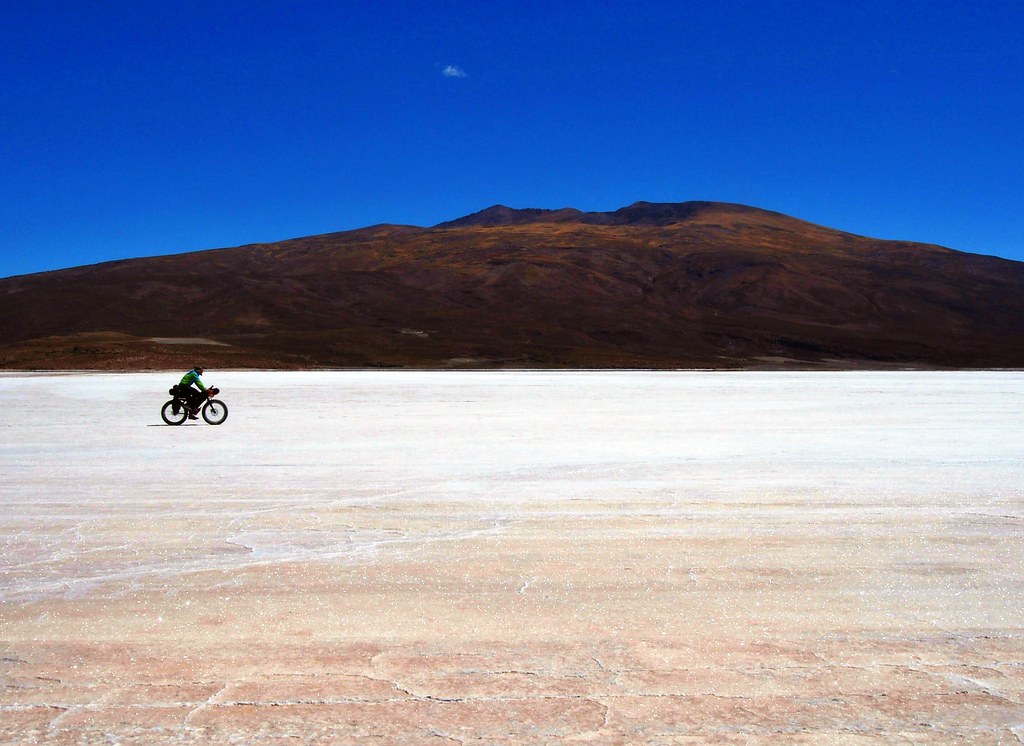 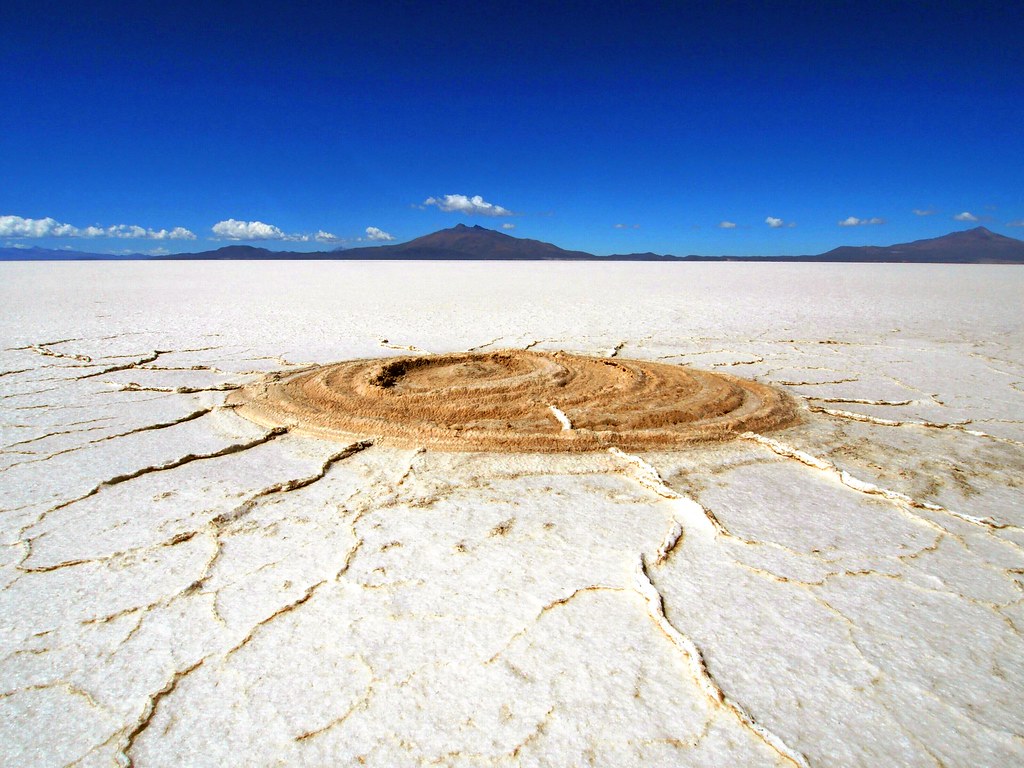 Riding free form across the Salar following a compass bearing, we eventually reach the end of the Salar and with it a reminder of what lurks underneath the thick salty crust; Water. 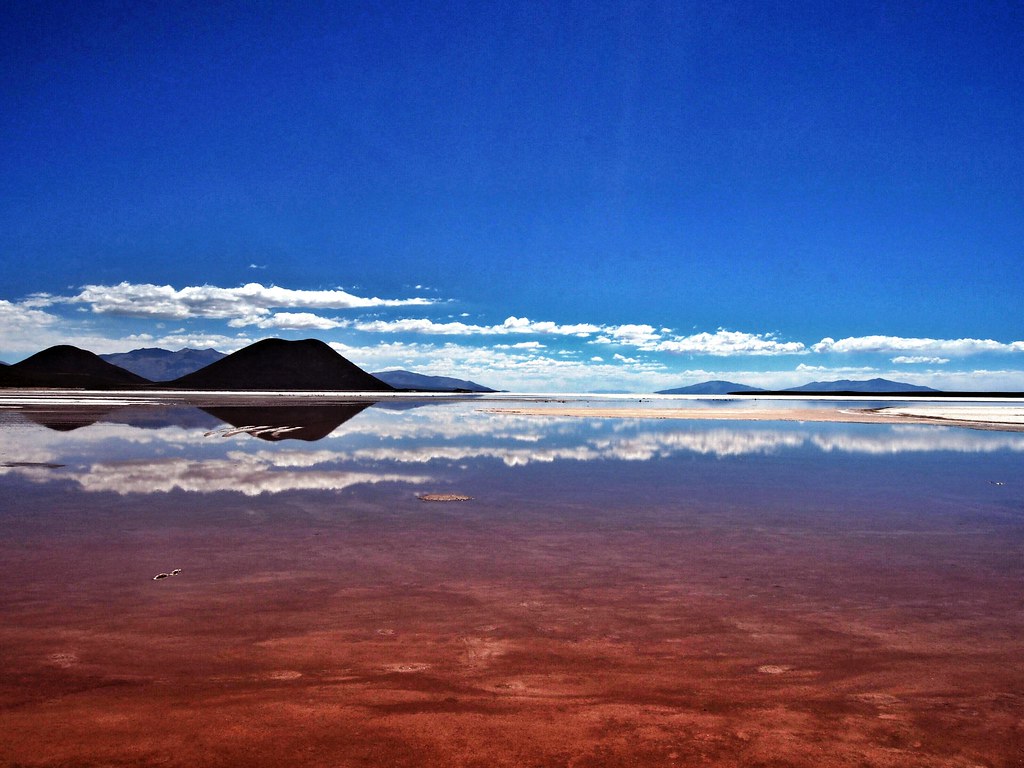 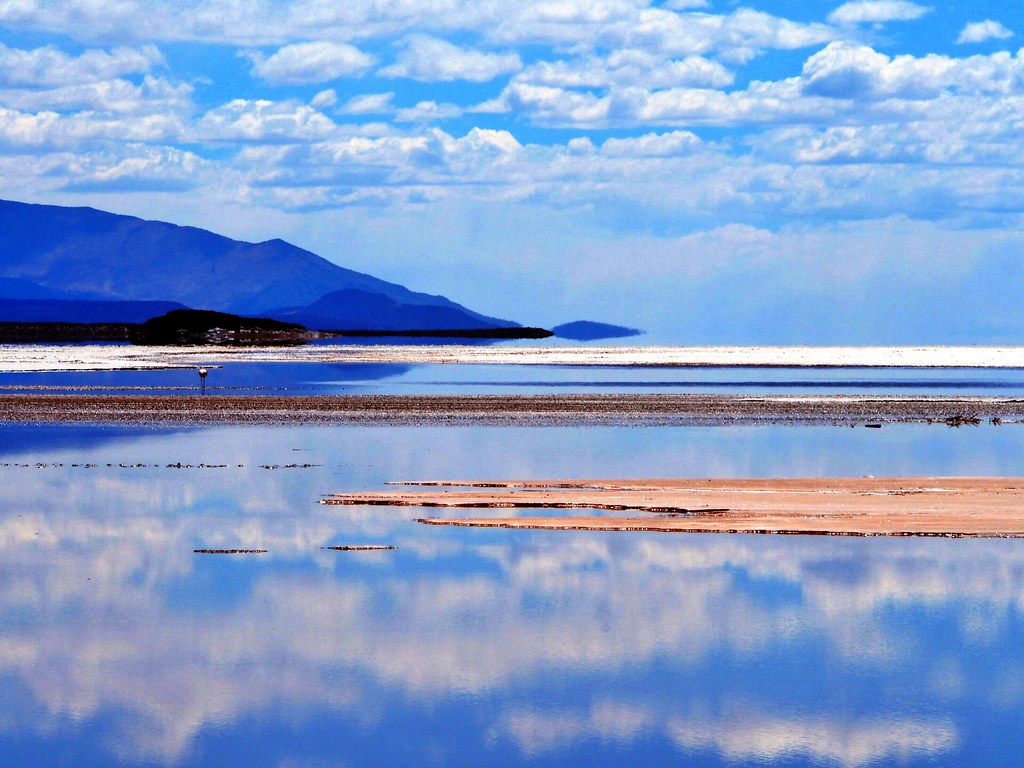 Our Salar Spectacular over we roll in to the small village of Copaisa. The now legendary Petronilla accosts us in the village square, and takes us to her comedor for a lunch of Llama Jerky and Rice.

Its an enchanting few hours as she asks inquisitively about our home countries, native language and tells about life on the Bolivian Antiplano. Treating us to homemade ice cream on the house, it’s difficult to get a shot of this warm, kind lady between a fit of girlish giggles. 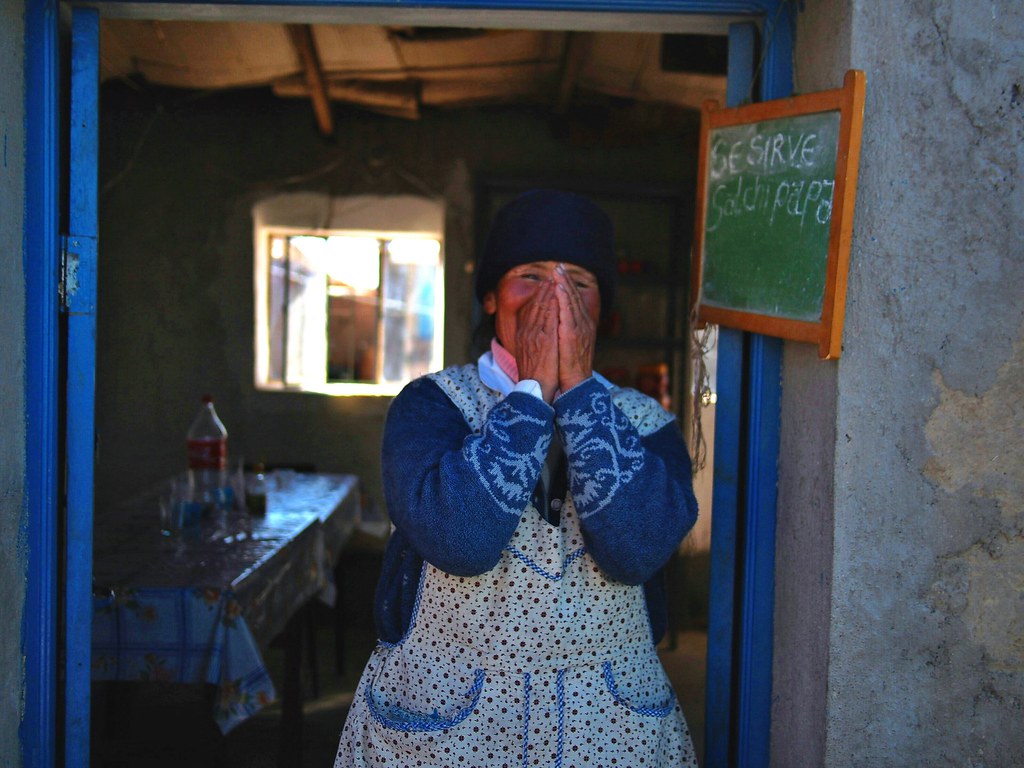 Returning to the type of trail we know, we head toward the Sajama National Park on the border with Chile. Our eyes drawn to snow cone of Nevado Sajama (6542m) in the distance. 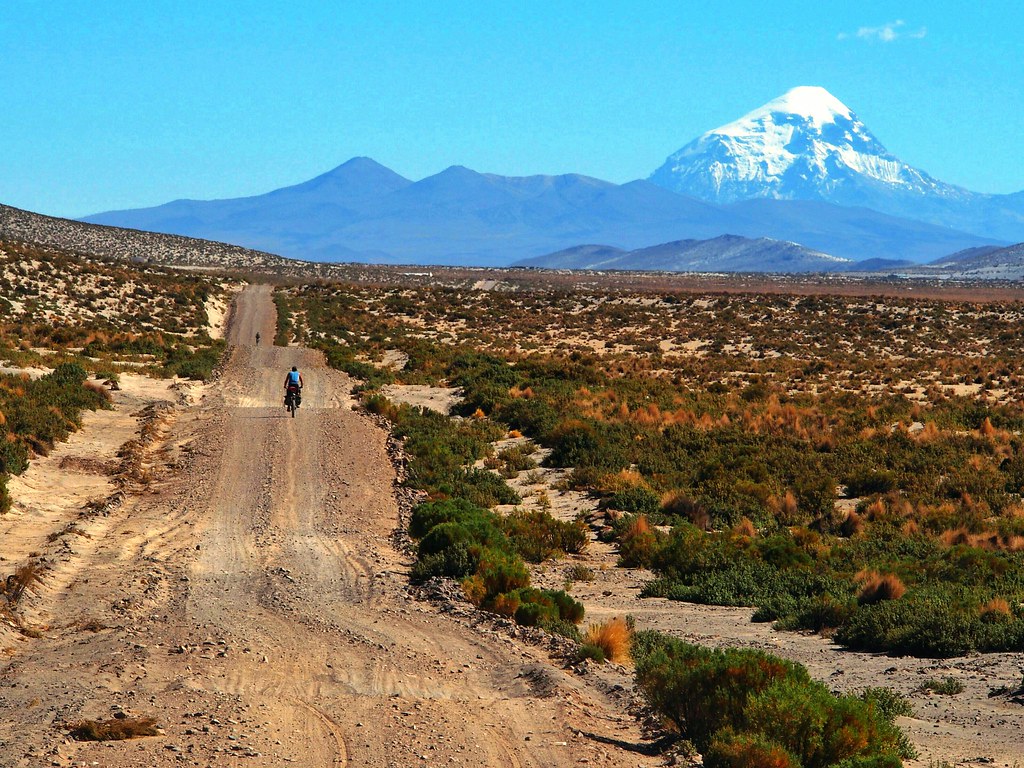