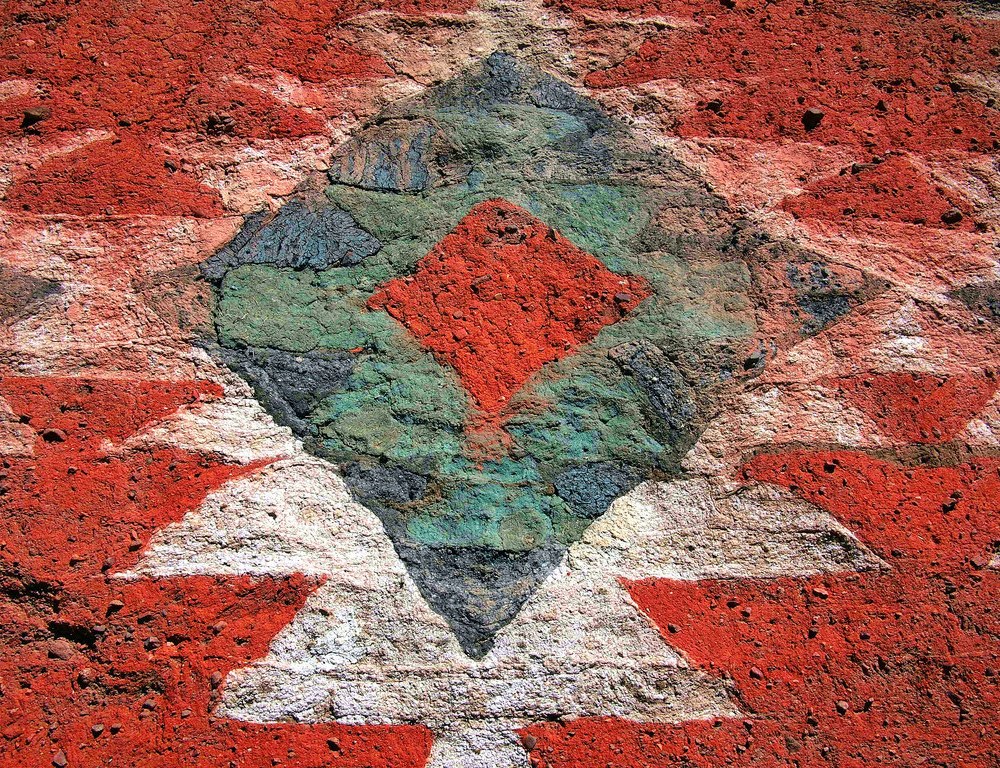 After abruptly jerking you forward, I am once again hitting rewind with the next installment in the Bolivian Backlog that sees us deposited in Bolivia’s capital; La Paz.

As with much of our travels in Bolivia it has rarely been in a straight line, jaggedly weaving our way across the Bolivian Antiplano.

Leaving the Salars behind, we enter the Sajama National Park. The snowcapped peak of Nevado Sajama off in the distance.

As darkness descends we camp alongside the multicoloured Chulpas Policromas providing an atmospheric backdrop as the wind howls throughout the night. 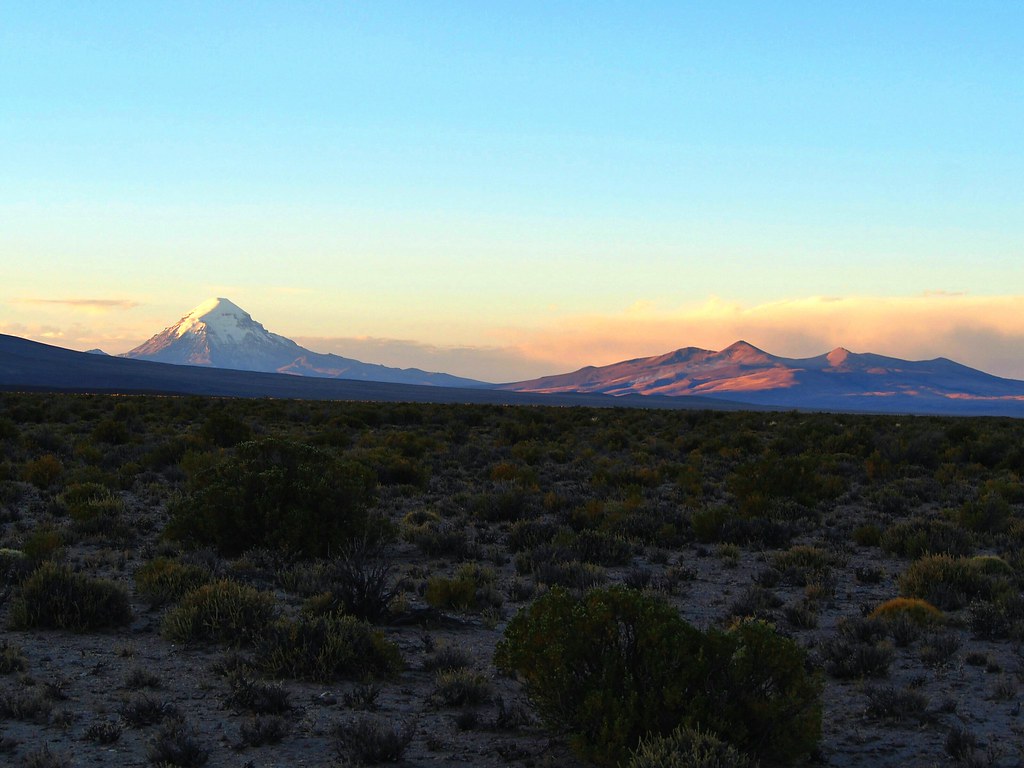 As the sun rises in the east, the Ayamara burial caves are bathed in sunlight. 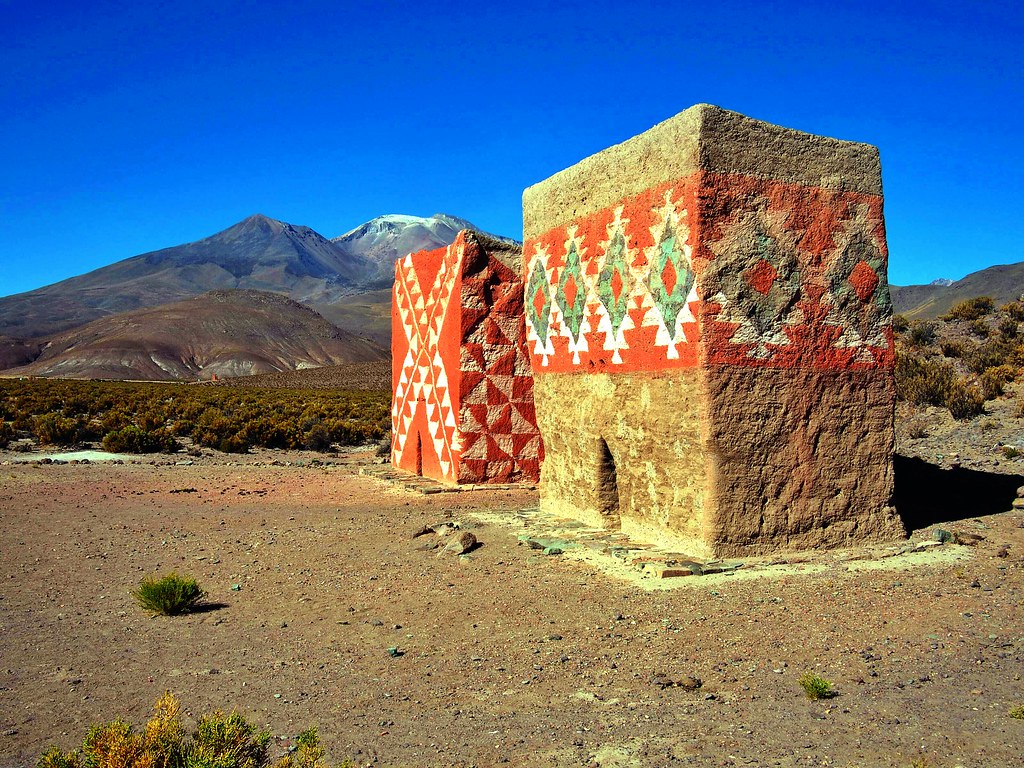 Illuminating the entrances and showing off the earthy hues of the pigmentation used to provide the striking colours and patterns. 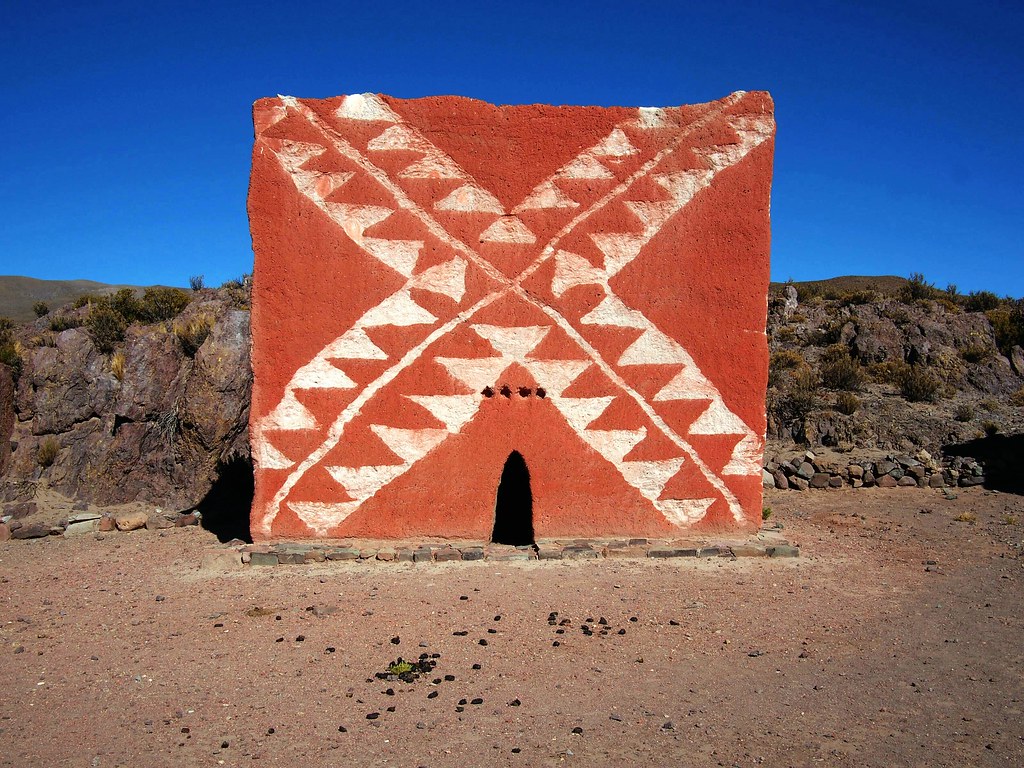 Stood against the harsh elements, these are said to be some of the finest examples on the Bolivian Antiplano. 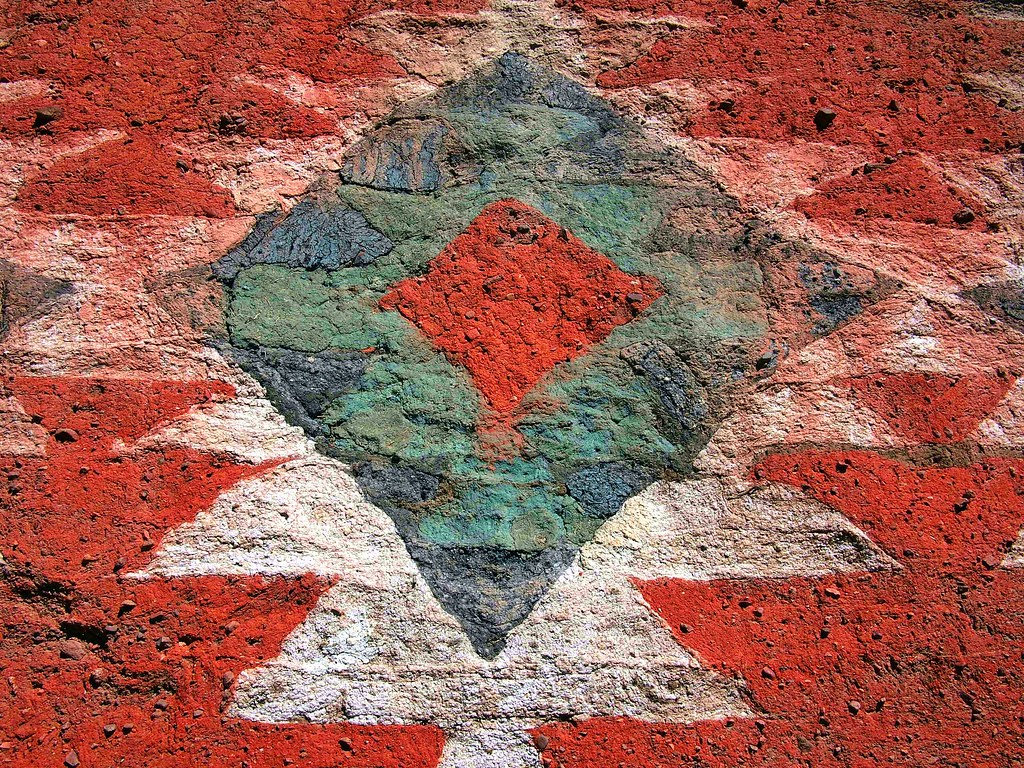 Passing tantalisingly close to another 6000m volcano we decide to make the short detour to Okantango. With hard packed neve ice and well established cornices in the volcano’s upper reaches we walk up to 5898m, before realising we are hopelessly under prepared to make the volcanoes lofty summit. 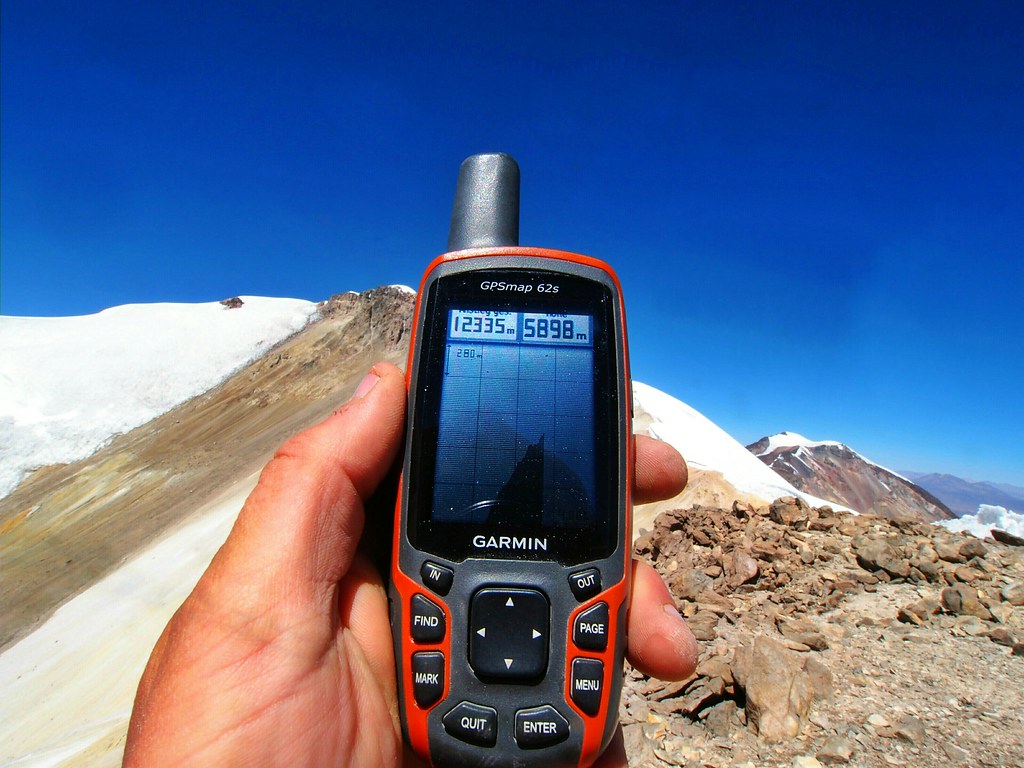 Stood high above the Antiplano. We stare off in to the distance, the remoteness and solitude of this area laid out bare for us to see. Just us, Llamas and Volcanoes as far as the eye can see. 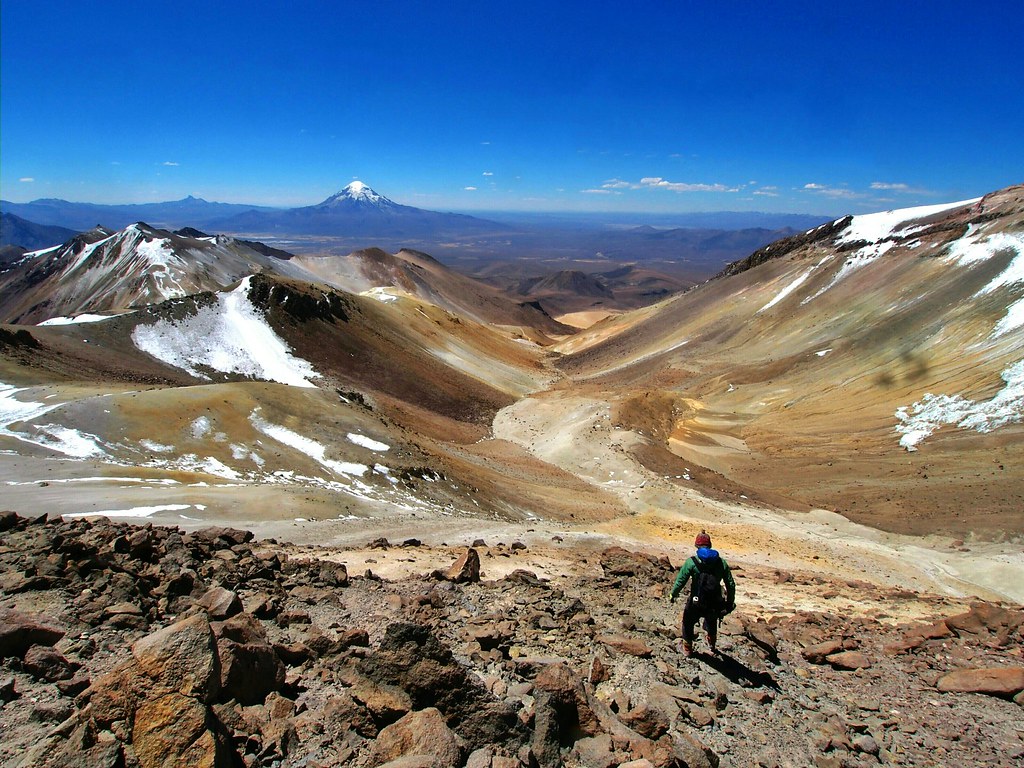 Rolling through the truck stop and transit hub of Tambo Quemado we take the tarmac for (yet another) final jaunt in to Chile through the Lauca National Park and the perfectly formed Volcan Parincota stood above Lago Chugara. 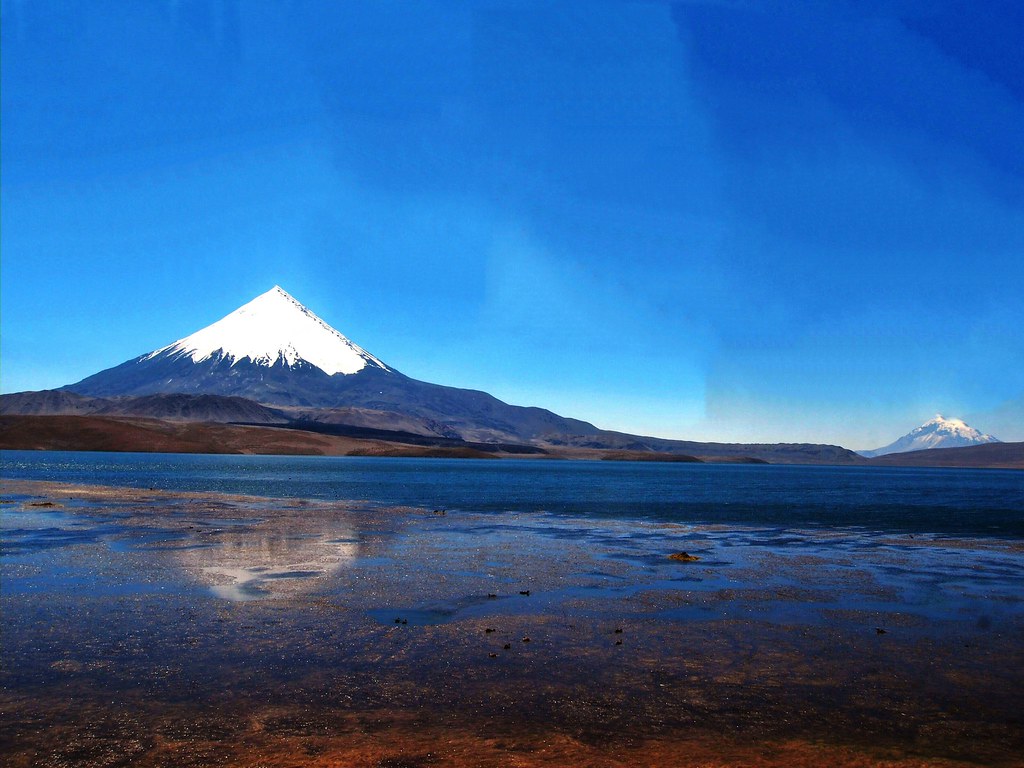 Descending down toward the coast we tack inland once again, hitting the dirt bound for Quebrada Allane. Descending deeply in to the canyon through a series of switchbacks. 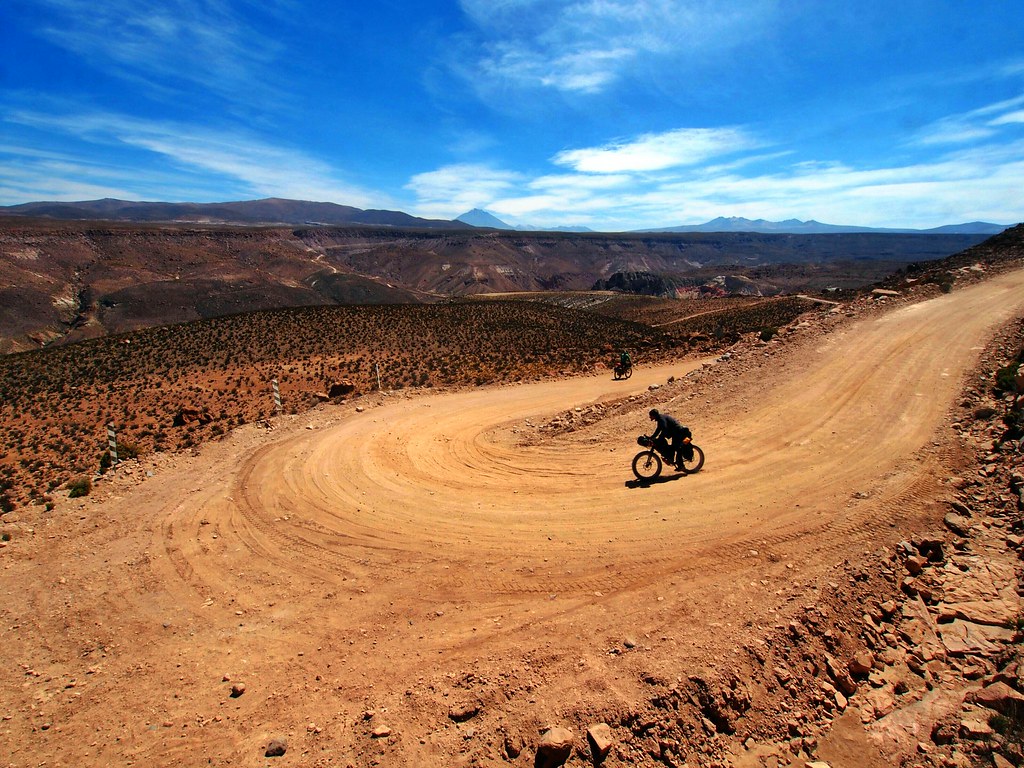 As we climb out of the other side of the canyon, we look back at the deep gorge and mineral stained hues. 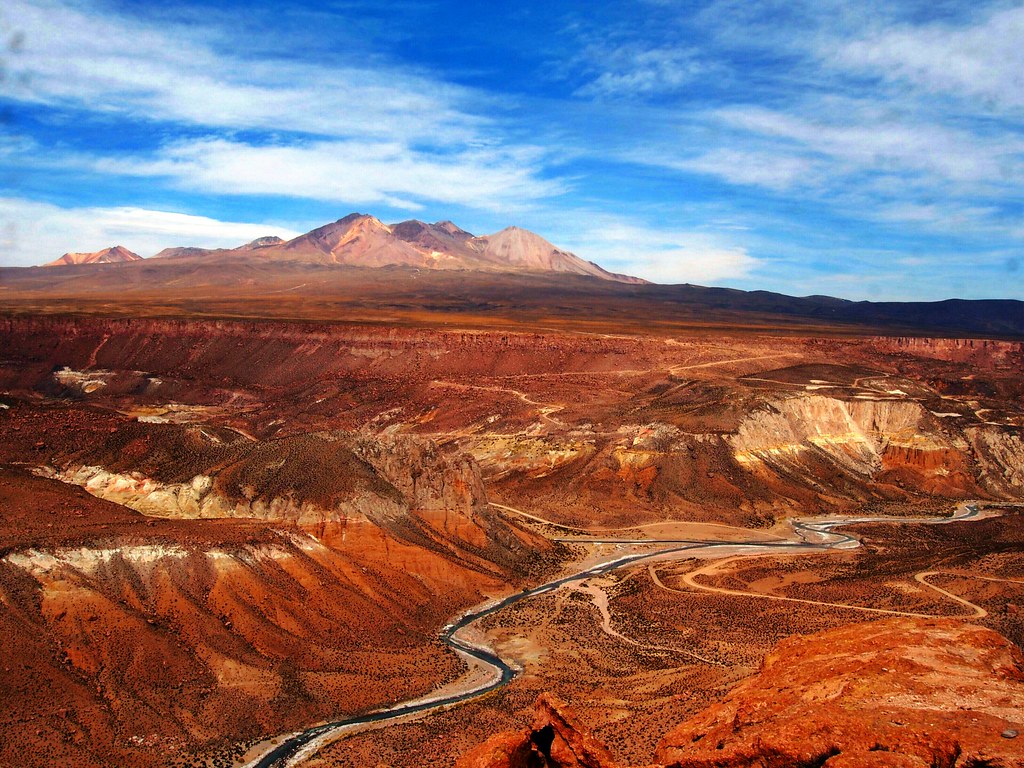 Following railway tracks and pipeline roads, we ride through desolate towns and in to the town of Tocara putting us within spitting distance of Peru, Chile and Bolivia on either side.

Before once again crossing the border in to Bolivia and with it the familiar scrubby landscape of the Antiplano.
After months spent under settled skies, we find ourselves delving deep in to our bags for waterproofs. The rainy season fast approaching. 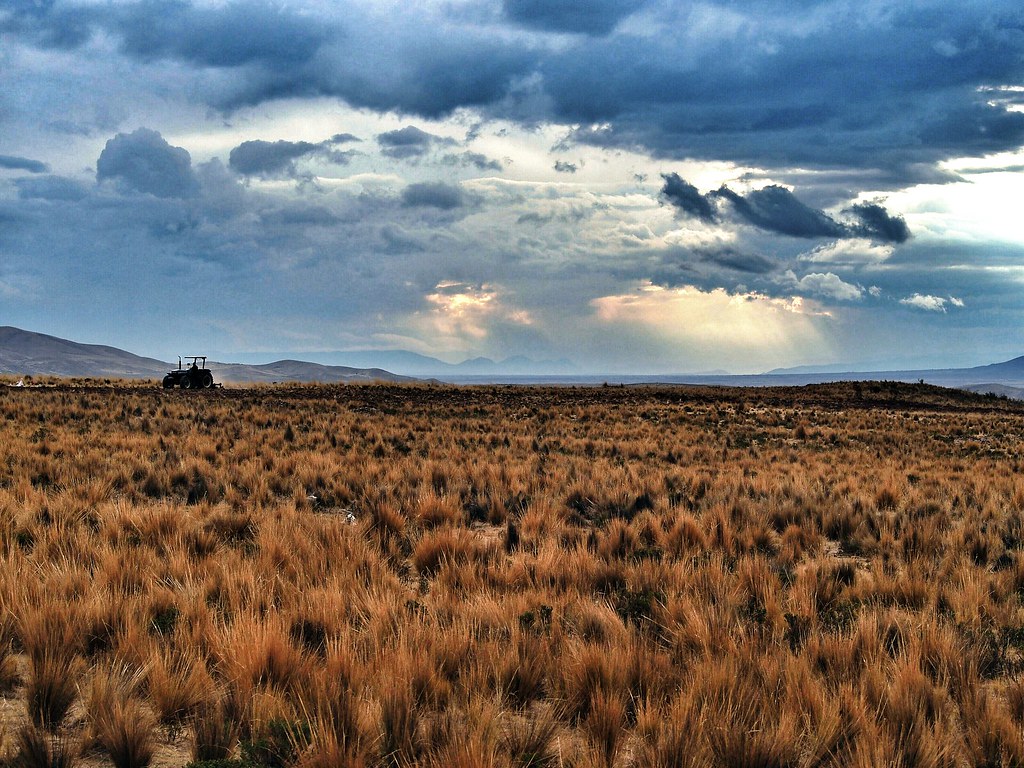 Ducking in to villages whilst showers pass, snotty nosed kids chase us as we leave. 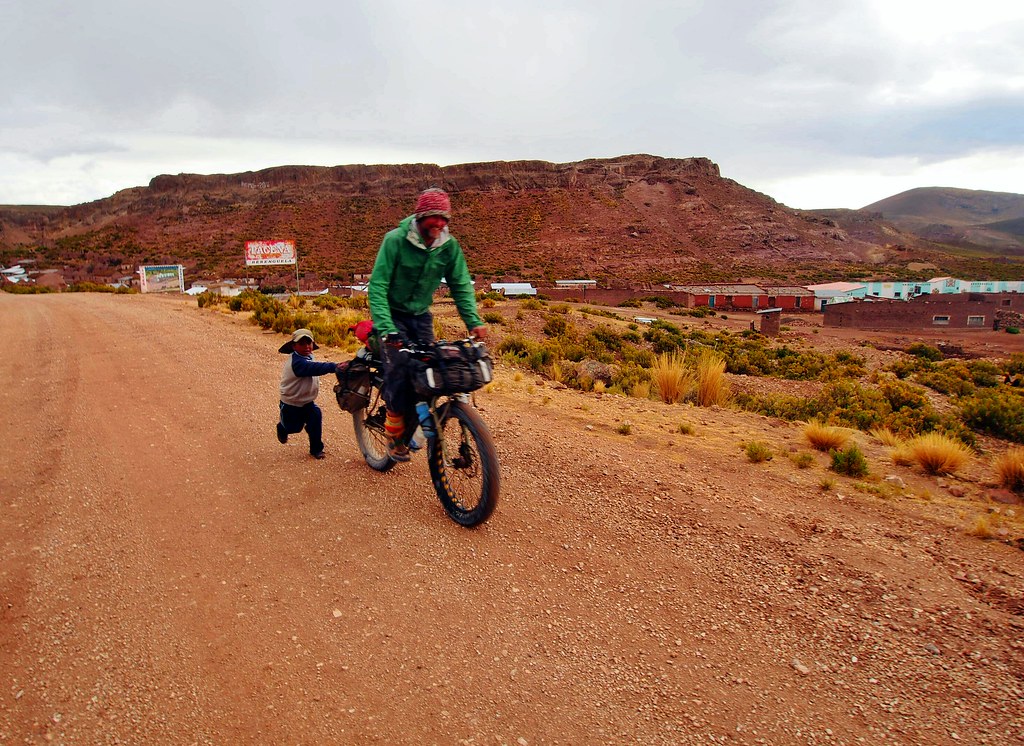 Blissfully unaware of the altitude and our efforts to take flight. 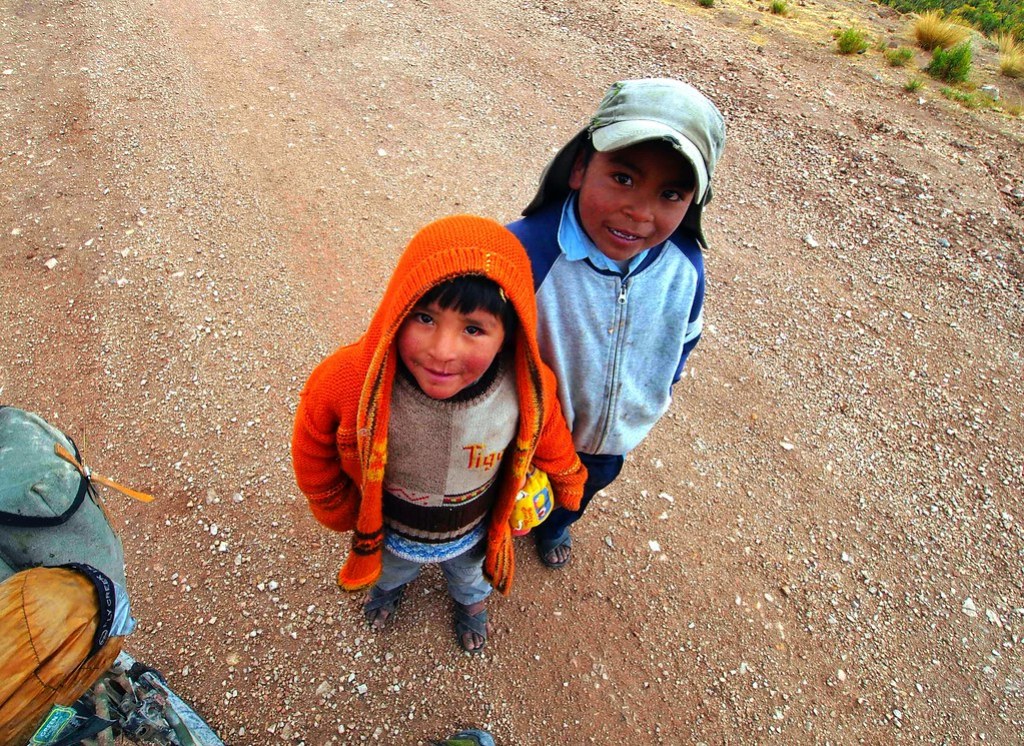 You would think its flat. 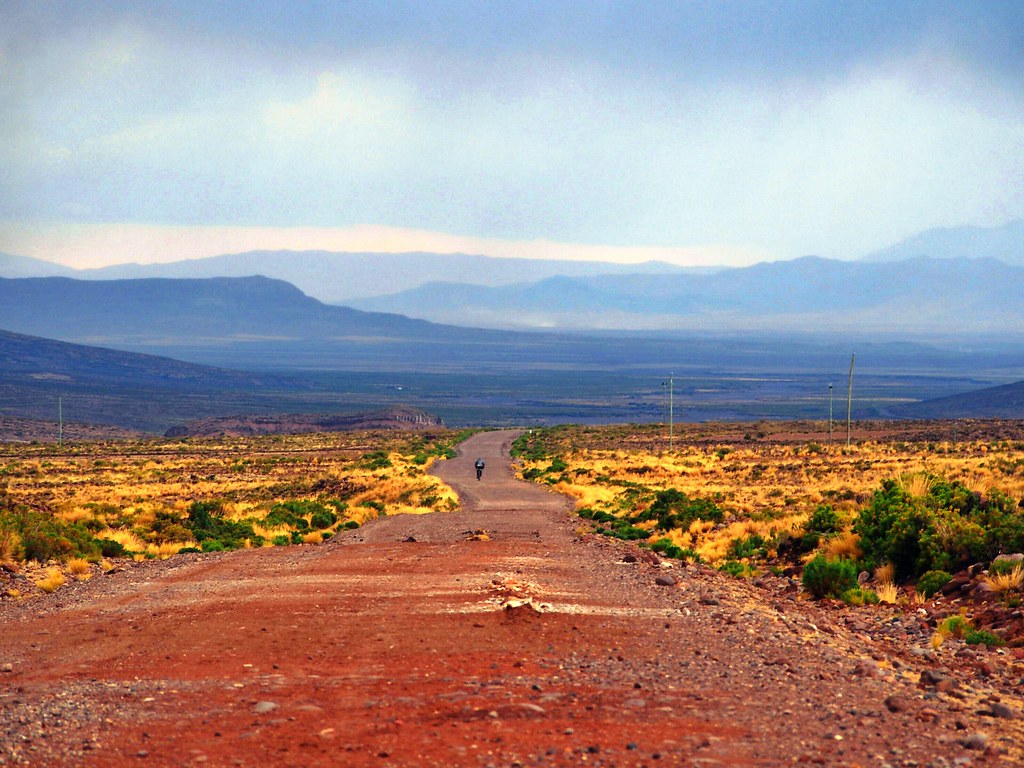 But we hit roller after roller. As we grind up yet another. 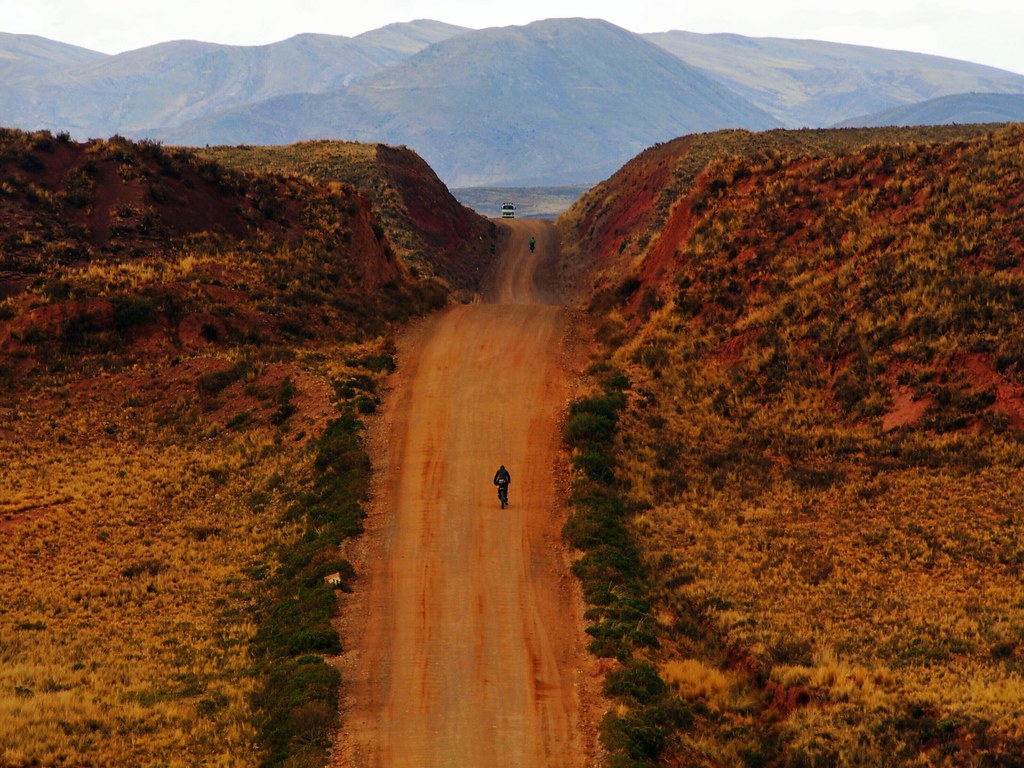 After a night spent sleeping on the floor of a church high on a hill, we reach the town of Vichaya for a quick breakfast.

The dull din of another tuneless Bolivian band, we roll our eyes at the thought of yet another Bolivian fiesta. Slowly the celebrations gather momentum, as the main street fills with women in traditional Bolivian dress. Some motion us to dance with them. Porque no? 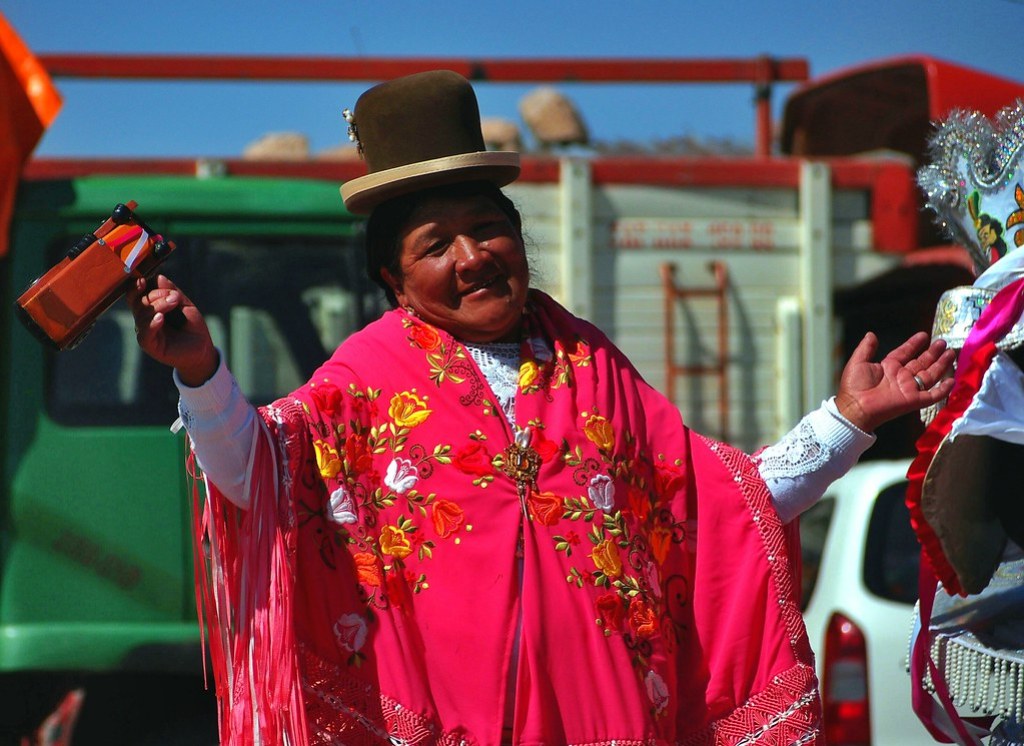 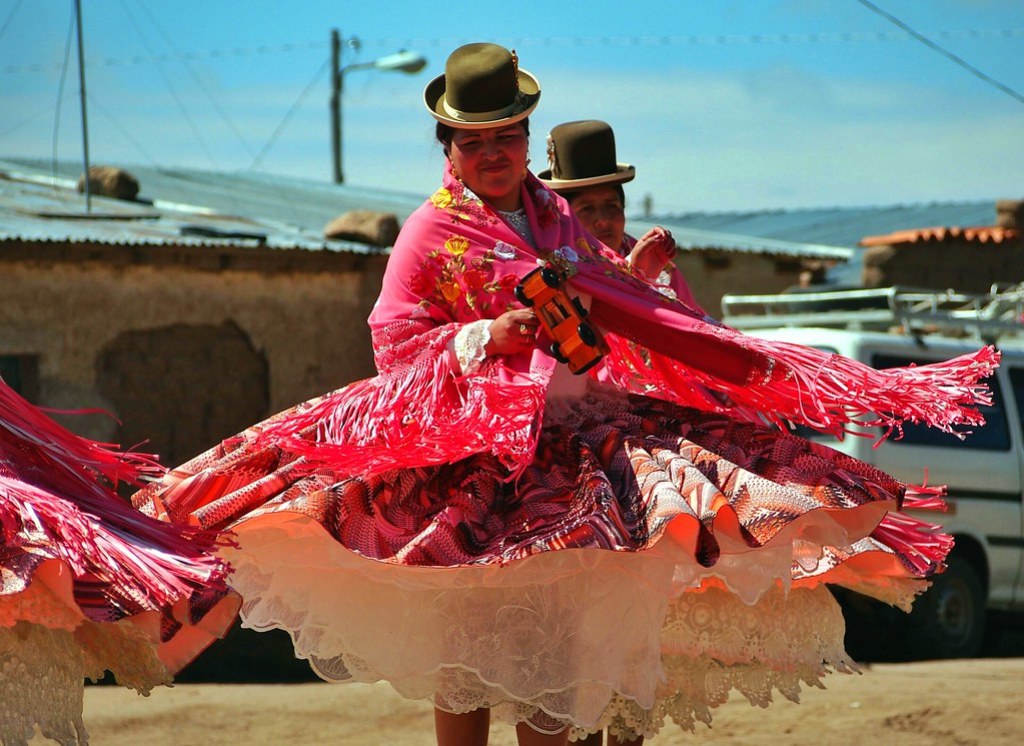 Mataracas ratchet adding to the visuals. Thought to signify the rattling of chains by African slaves in Bolivia’s silver mines. 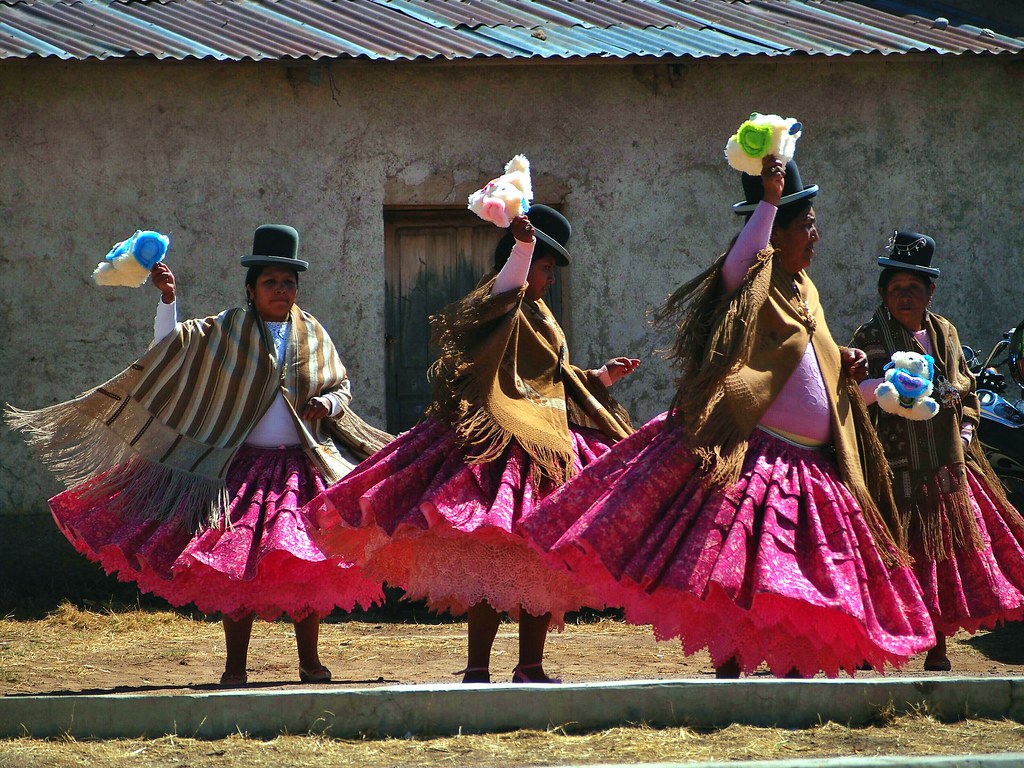 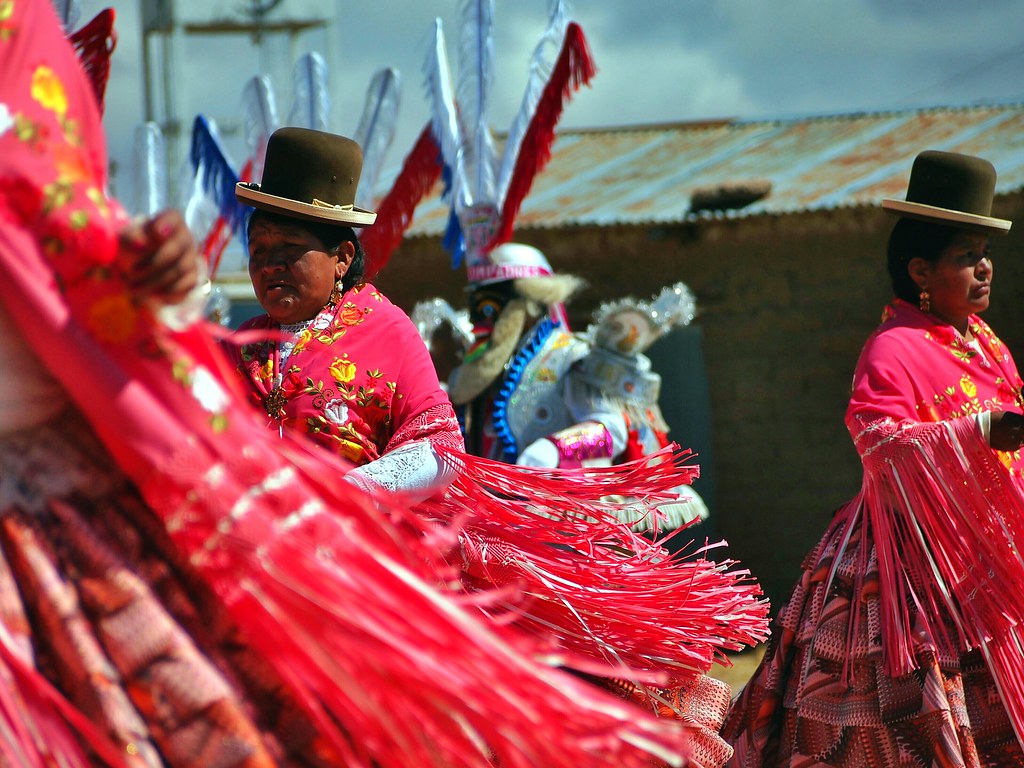 Its not just the women in on the act. Men dance the Morenda (The Dance of the Black Slaves) particular to the Bolivian Andes characterised by a mixture of African and Indigenous elements. 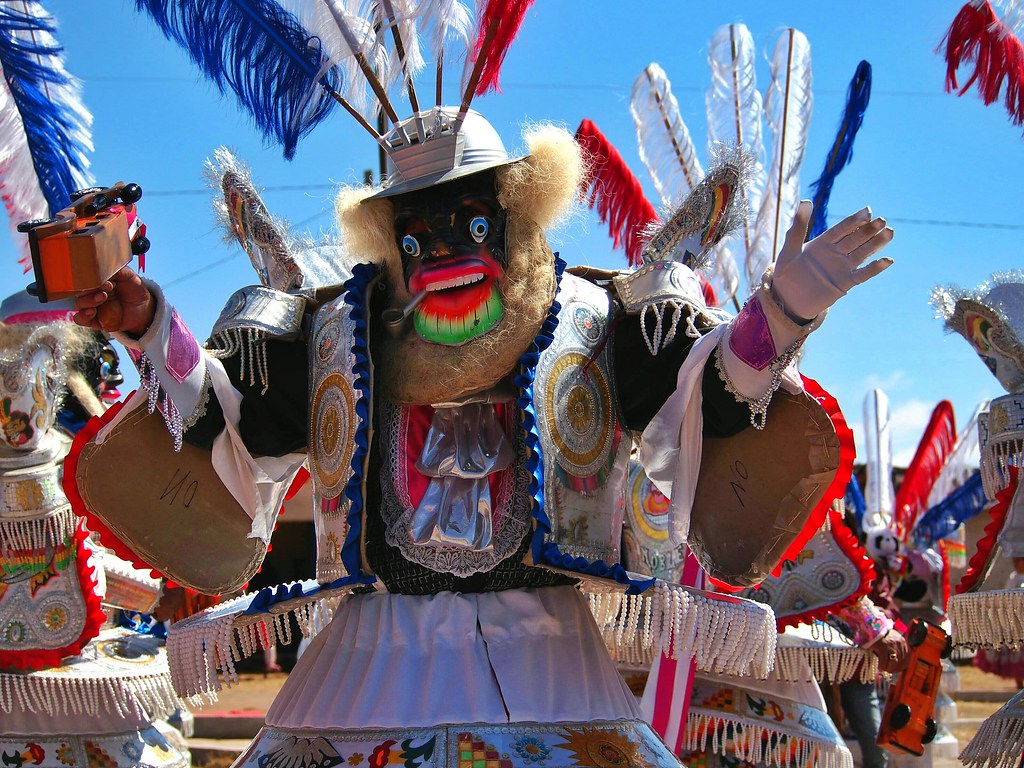 Captivated by spectacle before us we look on, take pictures and chat with many people. Once again underlining the warmth, pride, inquisitiveness and openness of many of the Bolivians we have met throughout our travels. 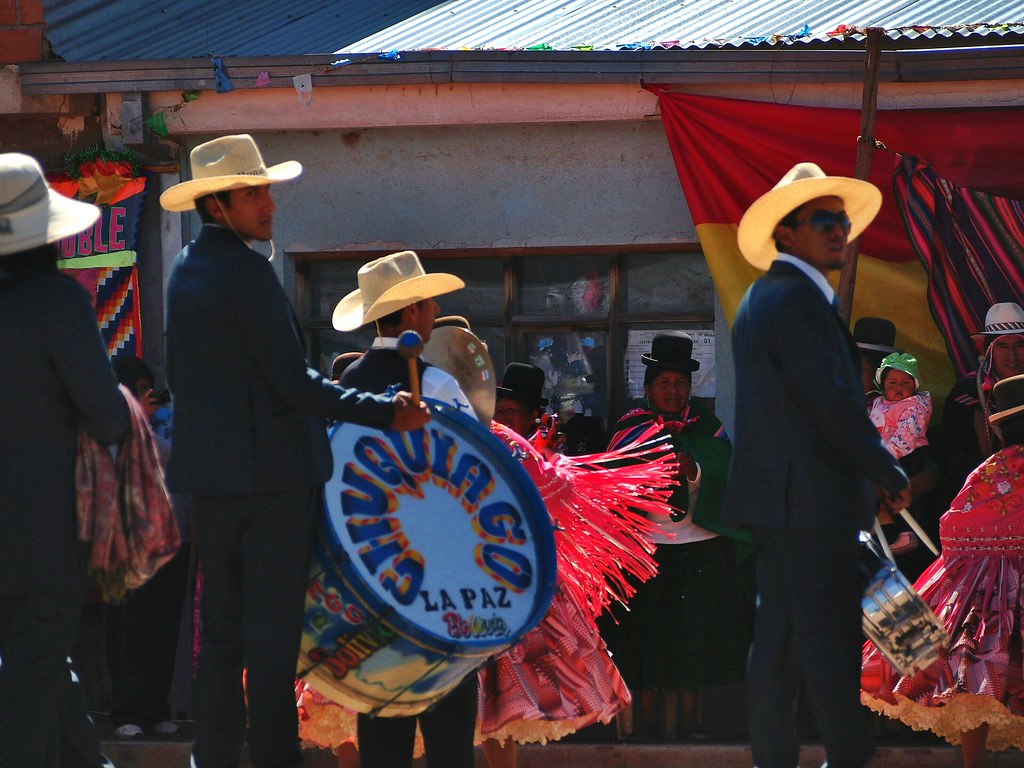 All that is left is to tap out the remaining few kilometres as the mass of the Cordillera Real come in to view. Peering downward in to the bowl the city of La Paz is laid out before us. 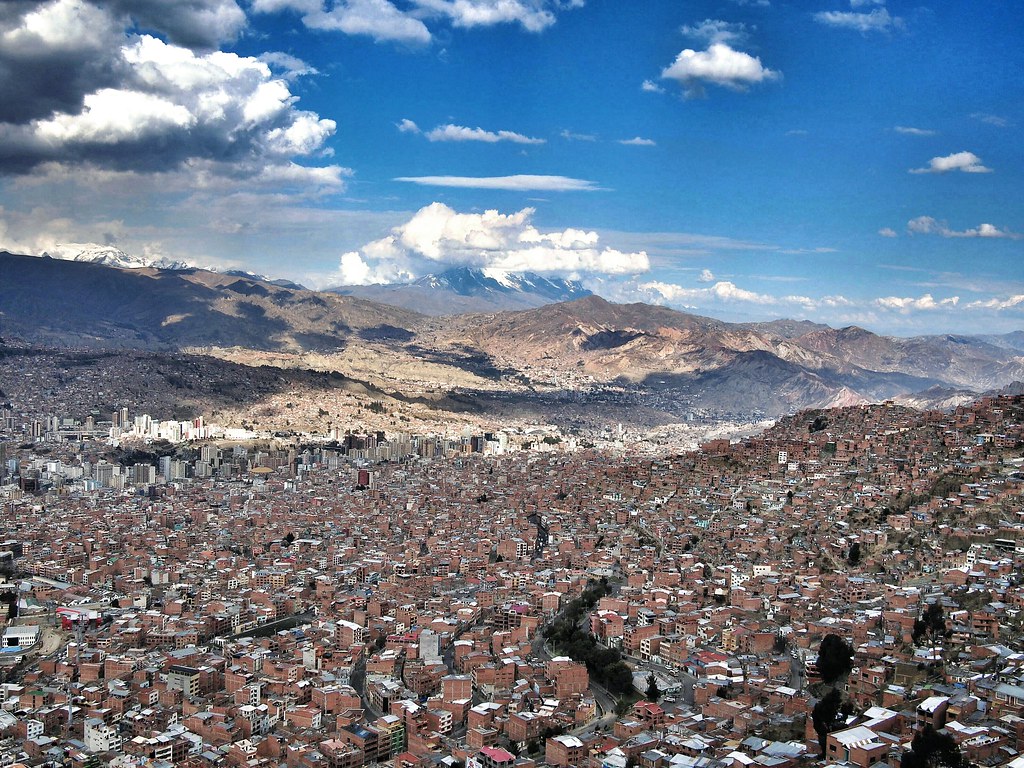 Like many of the cyclists who pass through the city we make use of Christians kind hospitality and crash on the floor of the Casa De Cicilistas. We twiddle with bikes and make new friends in the form of Casa Residents: Beardy Nathan, Cherry and Charmian and the Lichteinsteiners. Before sadly saying our goodbyes to Andi as he heads back to Germany with Mara the Ogre.