Its a stuffy and cramped bus journey from Manali to McLeod Ganj that sees the Ogre and I deposited 6 kilometres north of Dharmsala in the early hours of a Tuesday morning.

A scrum of people congregate to collect their bags whilst taxi drivers and touts mingle with the assembled crowd trying to secure business from weary travellers.

I wander the streets before decamping outside my hotel with a couple of hours to kill before the hotel’s doors open. As dawn breaks a steady stream of worshippers make their way to the temple for the morning puja at the Buddhist temple.

A sweet Tibetan lady takes pity on me and ushers me to her home for chai whilst my hotel opens, such is the Tibetan way; charming, friendly and affable.

McLeod Ganj has an altogether different feel to Manali. Perhaps its the frequent hill fog giving it a more sombre feel, the flash of maroon robed monks, or the more mature traveller rambling down the temple road.

Home to the Dalai Lama and the Tibetan government in exile many tourists flock here for a glimpse of the Dalai Lama or the chance to attend one of several public speeches held throughout the year. Others are drawn for the many spiritual and holistic classes widely available.

A visit to the Tsuglagkhgang complex housing the Dalai Lama’s official residence, the Namgyal gompa and Tibet museum provides time for contemplation as pilgrims come to pay their respects to a displaced religious leader and sovereign in exile, a lucky few being granted an audience with his holiness.

The Tibet museum documents the Chinese invasion of Tibet, the Dalai Lama’s escape to India and the treatment of Tibetan people under Chinese rule and subsequent occupation.

It proves to be both thought provoking and harrowing in equal measure. A tale of a national identity being eroded, cultural decay as the Tibetan language is replaced by Mandarin. The destruction of vast amounts of religious artefacts as part of the Chinese ‘Cultural Revolution’ of the 1980s along with the destruction of an estimated 6,000 monasteries.

Many Tibetans are left with little choice but to flee from their homeland, crossing the Himalayas and with it leaving friends and family behind rather than bow to sustained religious and cultural persecution.

My time in McLeod Ganj offers up many interesting conversations such is the variety of traveller to India. Kim the outgoing, gregarious and giggly Australian practicing Yoga and exploring the spiritual and holistic side of India whilst contemplating her next steps in life. Jess the English graduate backpacking and volunteering before returning to the UK in search the first step in her career. The many monks which assemble in the cafes around town tapping away at their smart phones and tablets.

Yet it is the Tibetans in exile that leave the most lasting impression upon me. Years spent in exile, tales of longing for family and loved ones. These are educated and articulate people, who optimistically hope for a better life; peaceful and harmonious in their homeland.

Their plight underlined by 122 otherwise peaceful people choosing to set themselves on fire in act called self immolation, a selfless and final act, left with no further outlet under which to highlight their countries plight. 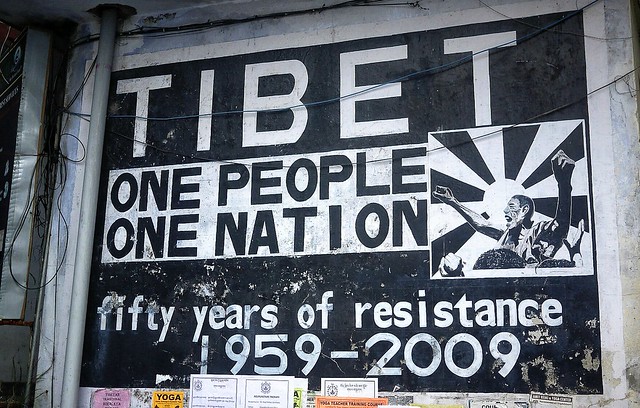 Pro Tibet lobbyists garnered the slogan “Free Tibet” its short catchy yet somehow trite. Chinese occupation didn’t happen overnight there is a long historical association between the two countries dating back hundreds of years, concessions were made by the Tibetans which saw China slowly encroaching across the border.

The Tibetan policy of non violence would always see it an easy prey, the British proved this at the time of the empire under imperial land grabber come explorer Francis Younghusband. In many ways both Britain and the UN are culpable for the status quo which exists in Tibet today unsupportive in the Dalai Lama’s pleas for support at the time of the Chinese invasion. Too worried of retributions of its own human rights violations across the empire in countries like Rhodesia and Oman.

Hugh Richardson a British representative of the time wrote:
‘The British government sold Tibet down the river … I was profoundly ashamed of the government and continued to be ashamed at their unwillingness to recognise that Tibet has a right to self-determination.

It is a sad, emotive and politically complicated tale this post only providing a cursory attempt at summary from my own limited personal experience. My own personal thoughts are perhaps slightly more negative when compared to the optimism of the Tibetans I spoke to.

Tibet is a geographically significant region for China, the source of over 16 major rivers including 4 of India’s largest rivers including the Brahmaputra. This fact alone may be one of the biggest reasons for Chinese reluctance to withdraw from the area

Even during my time in India there was widespread reporting of China’s attempts to dam the Bhamputra, only as time unfolds will the seriousness of climate change reveal itself. If as predicted the global temperature increases its logical to think that demand on water supply will increase as large areas even countires become uninhabitable. Only countries with sustainable water supplies will flourish, trans border rivers will become increasingly significant and great conflict will arise particularly between countries like India and China.

Perhaps the topic of climate change is a slight diversion from the real subject, however it is my hope that with the passage of time Tibetans will gain a  more lasting and secure foothold in Chinese society, free from persecution and intolerance. However this is only likely to come when China itself becomes free.