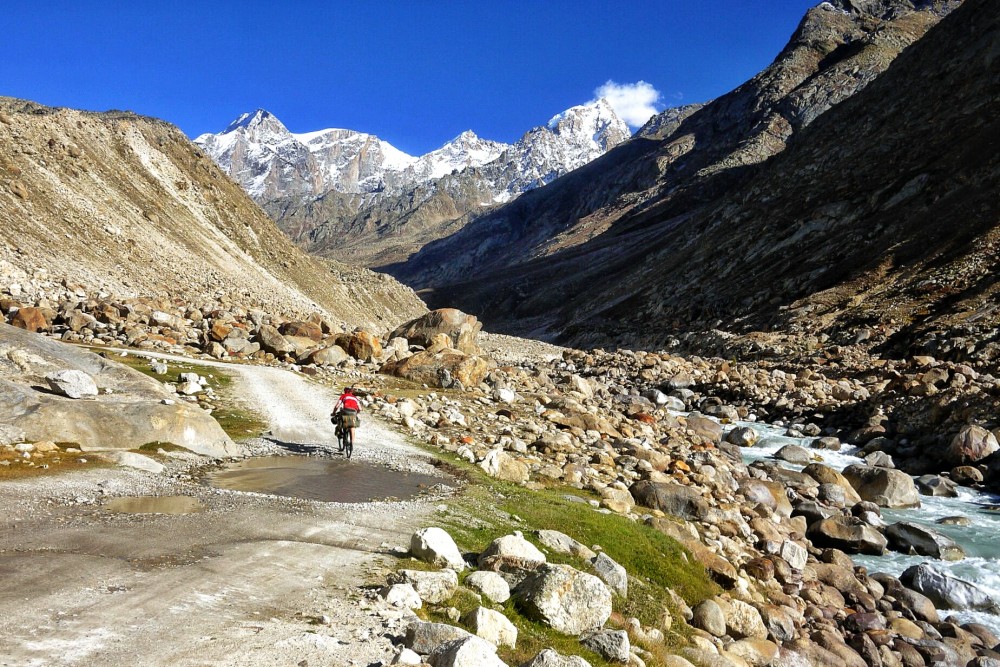 Retracing my steps from Chandra Tal I join back on to the dirt road headed in the direction of Rohtang La and the junction of the Leh to Manali highway. 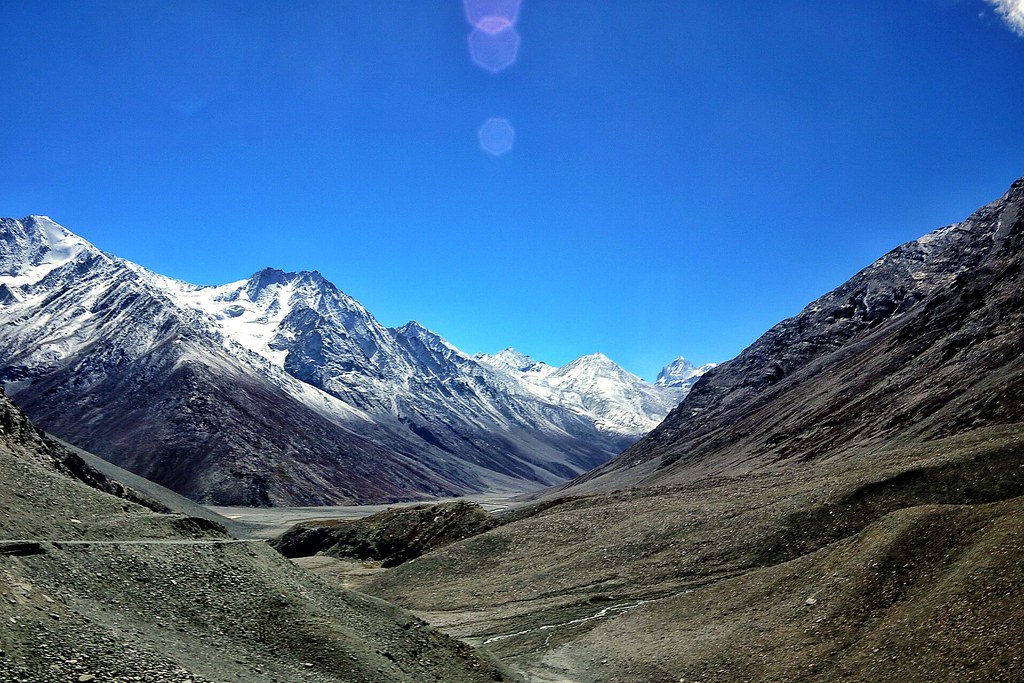 I had been warned the road was rough, but its surface is jarring and makes for slow progress as it weaves through a dry river bed. A confusing collection of tracks as new tracks have been forded as the water level rises and falls in relation to the snow line.

Whether its the road surface, a slight hangover, or a sense of sadness that I’m shortly due to leave this incredible valley, I’m not in the zone that’s for certain.

On the horizon I spot a lone figure riding towards me on a heavily laden bike, as the other cyclist draws closer I meet Shirine a 20 year old American with two dogs in tow. It doesn’t take much persuasion on either part to clamber off our bikes and lounge in the sun, spending the best part of 2 hours chatting and eating snacks. 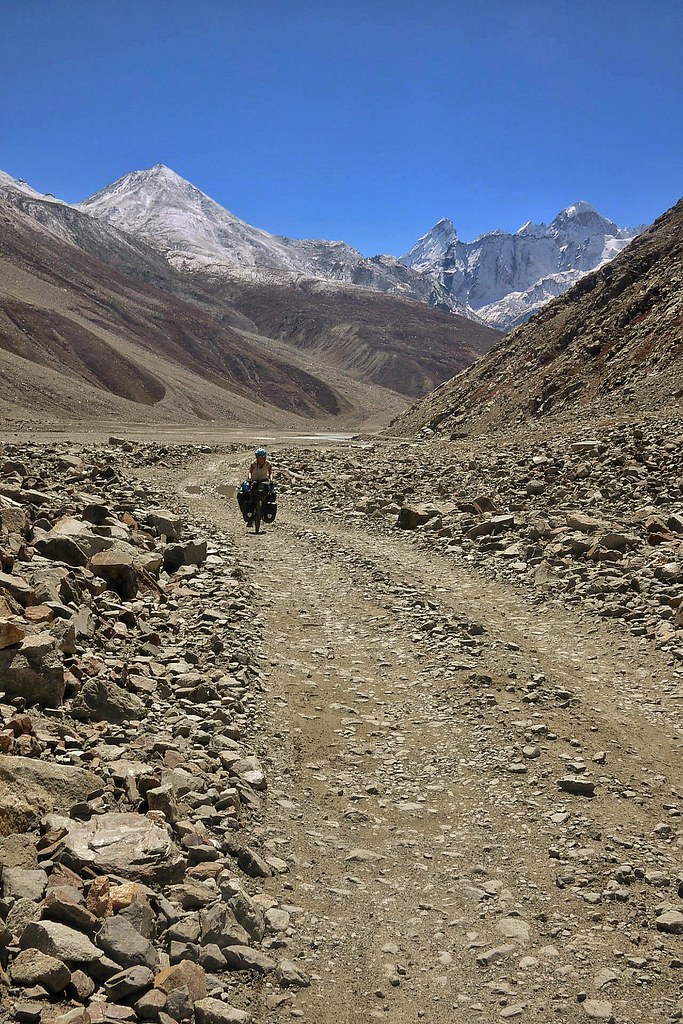 Despite Shrine’s load being way in excess of her tiny physical stature she is brimming with energy and has many exciting adventures planned over the next couple of years.

Its a refreshing encounter and sets the tone for a positive afternoons riding, the sun is high in the sky and I reflect on the past 2 weeks spent riding in this vast and wild landscape; the ever changing views as I have traversed this valley from south to north. 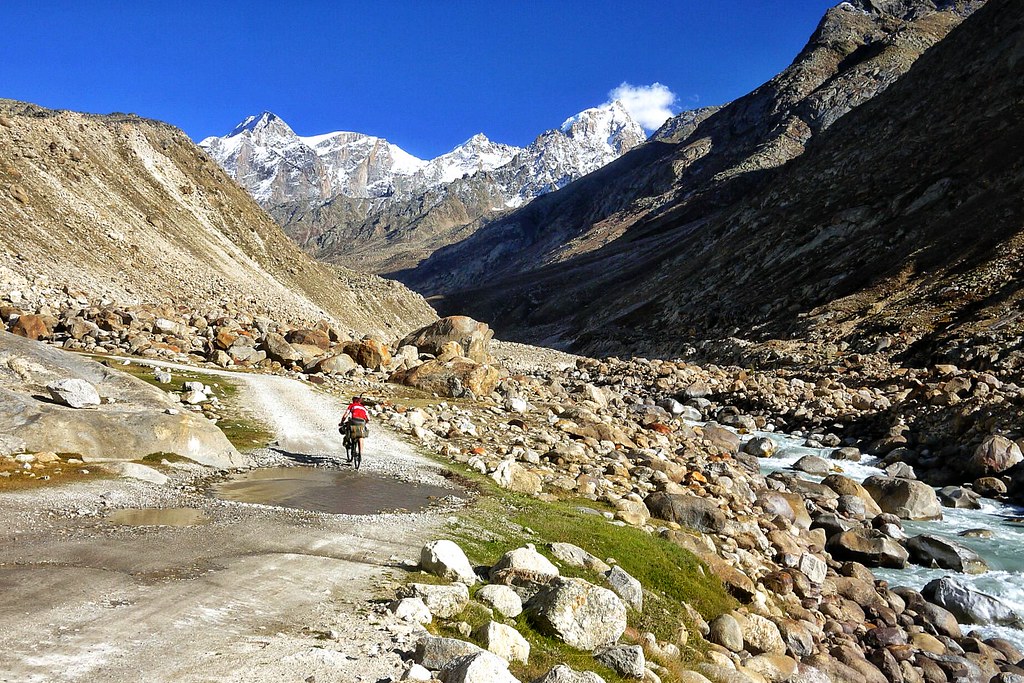 Whilst the photos capture the landscape perfectly there is a missing element; the Spitians who call this valley home. They are incredibly warm and kind hearted, the frequent shouts from the fields as they see me ride past and the many conversations I have with them about life in this remote and isolated valley.

Blocked in by snow for up to 6 months a year, tales of winters spent living in one room, families huddled round a single fire, children going to school and singing their lessons to stay warm as temperatures plunge to minus 30 degrees Celsius. Its impossible not to respect their stoic attachment to this land when many would have left for India’s warmer climes.

The afternoon soon passes and I reach the dhabas in Chantru as the sun is sat high on the valley walls. 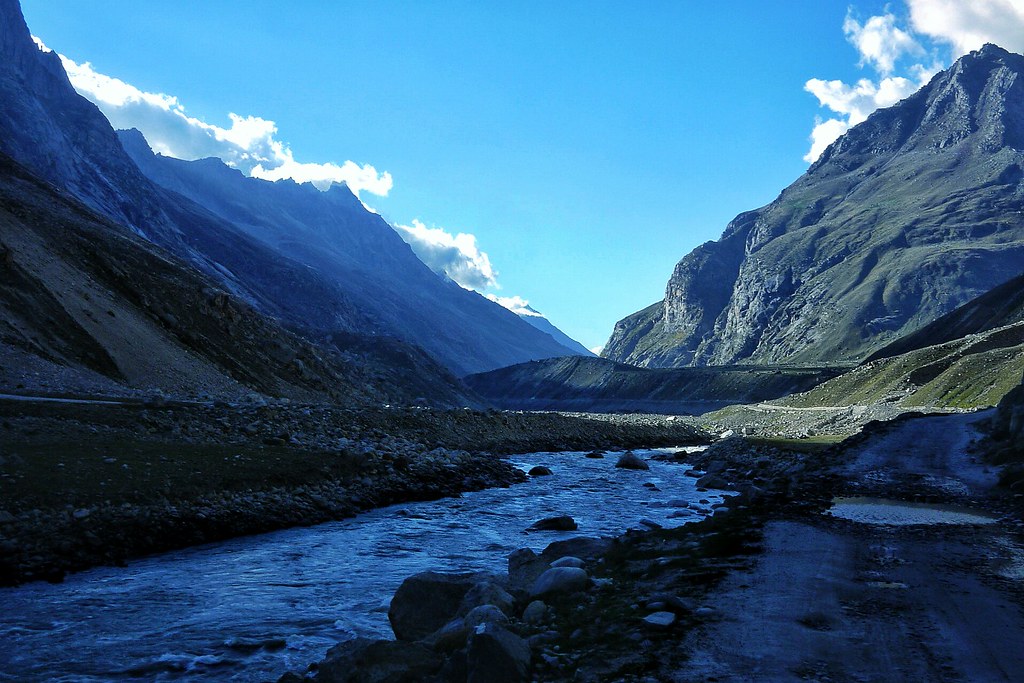 Here I meet Toby and Ian, fellow Brits cycling to Kathmandu. Its another evening spent in good company, tales from the road shared amongst acrid smoke as wet shoes are dried next to the fire. Bedding down for the evening on rock hard mattresses amongst bags of rice, convinced one of us will be visited by a rodent in the night.

After breakfast we set off in opposite directions, my mind still unclear whether I should head further north to Leh given the recent change in weather.

Stopping for a chai break in Gramphoo at the junctioin of the Spiti valley and the Leh Manali Highway I notice my rear bag rack has a series of stress fractures which will need repairing in Manali.

The climb up Rohtang La is a chaotic immersion back in to Indian driving as shared jeeps, lorries, motorbikes and cars all try to compete for the last remaining pieces of tarmac. 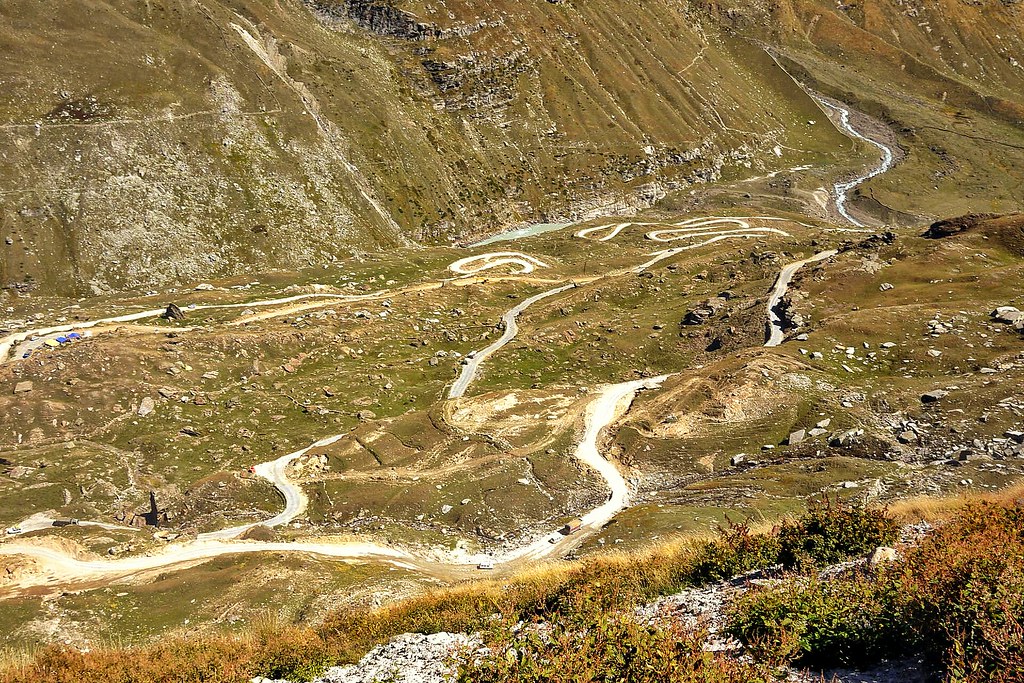 The road has been heavily damaged during the monsoon and the Border Roads Organisation are here in force, traffic frequently held up as the road is resurfaced and dangerously perched boulders are given their final nudge down there hillside with only a cursory glance to check for traffic below. 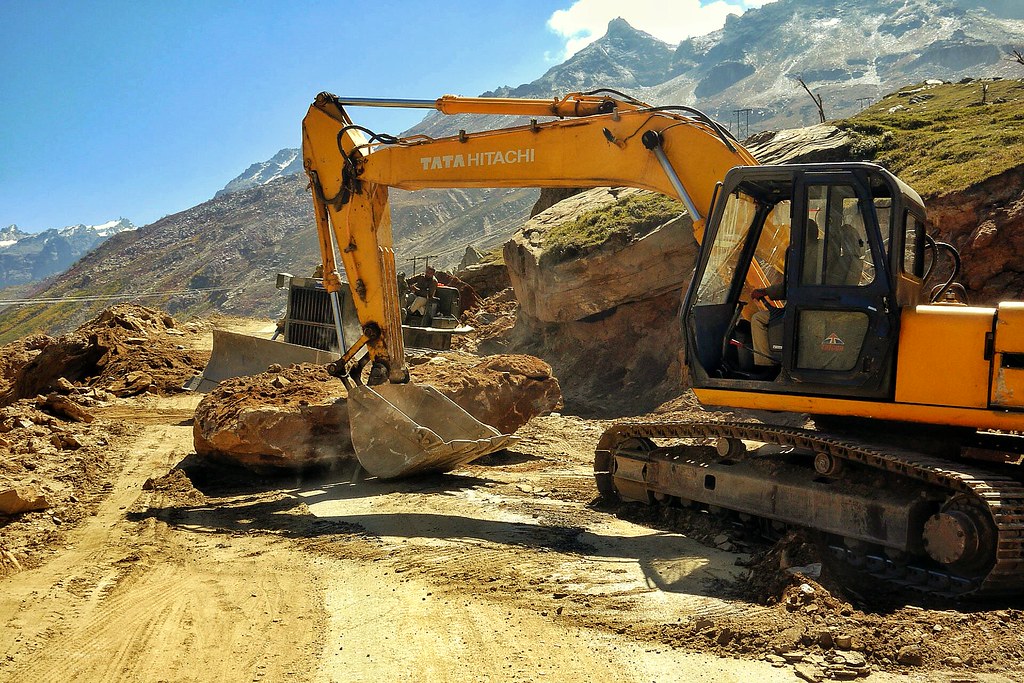 The 51 kilometre descent from the top of Rohtang La to Manali sees me arrive in New Manali’s main high street dirty, dusty and quite frankly frazzled. I couldn’t look or feel more out of place amongst New Manali’s middle class Indian tourists and honeymooners. 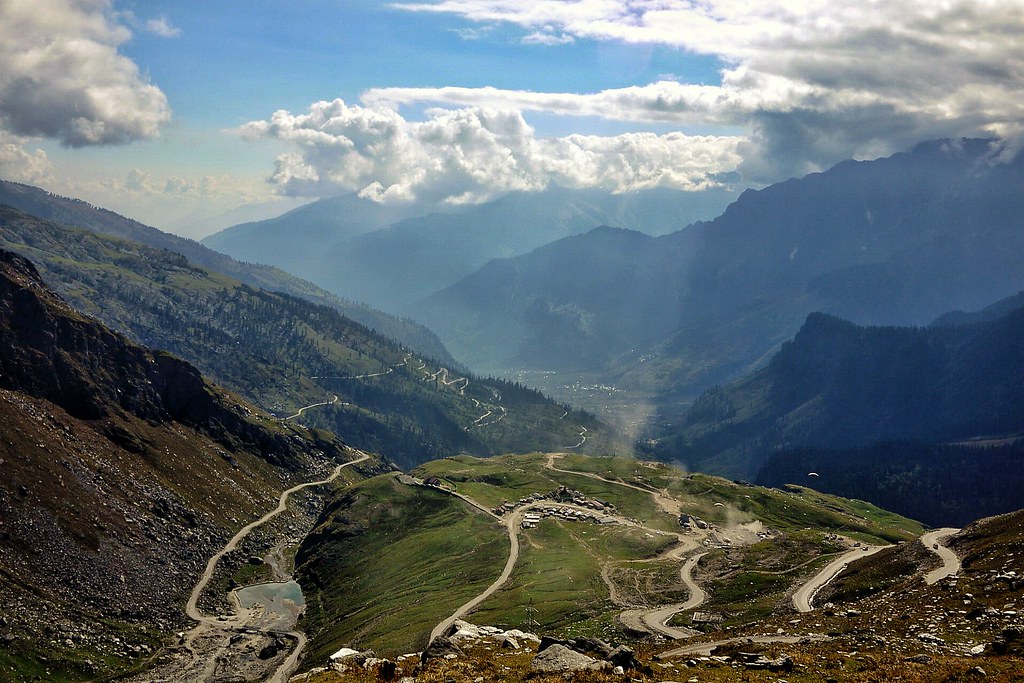 Once I get my bearings I head to Old Manali in search of sanctuary amongst fellow western tourists. As I ride through Old Manali I find myself in a backpackers ghetto, restaurants and shops cater to foreign tastes with traveller friendly menus and the usual outlandish clothing shops.

Manali is well established on North Indian’s hippy trail, its a sticky place that seems to hold young tourists, particularly Israelis who travel here en mass. Many seeking personal freedom and escape after 3 years spent in compulsory national service, a life put on hold, a time to forget and a time to readjust through the ever plentiful supply of hashish and charas that Manali is famed for.

My own circumstance couldn’t be more diferent I’m keen to move on as quickly as possible but a delayed parcel from the UK and an irreparable rear rack see me stuck in Manali for almost a full week, as each day passes I wait expectantly for my parcel, the drive to head north slowly slipping away as each day gets colder and colder, my window of opportunity ever reducing.

I wait, read  and chat with many other travellers over chai in the cafes around Old Manali.

Peter a German student currently studying in India lifts me from my general malaise, we spend a couple of days riding bikes to the nearby Naggar castle and trek up in to the high pastures above Vashist.

After a steep climb through tall pines the high pastures open up, goats and sheep grazing. 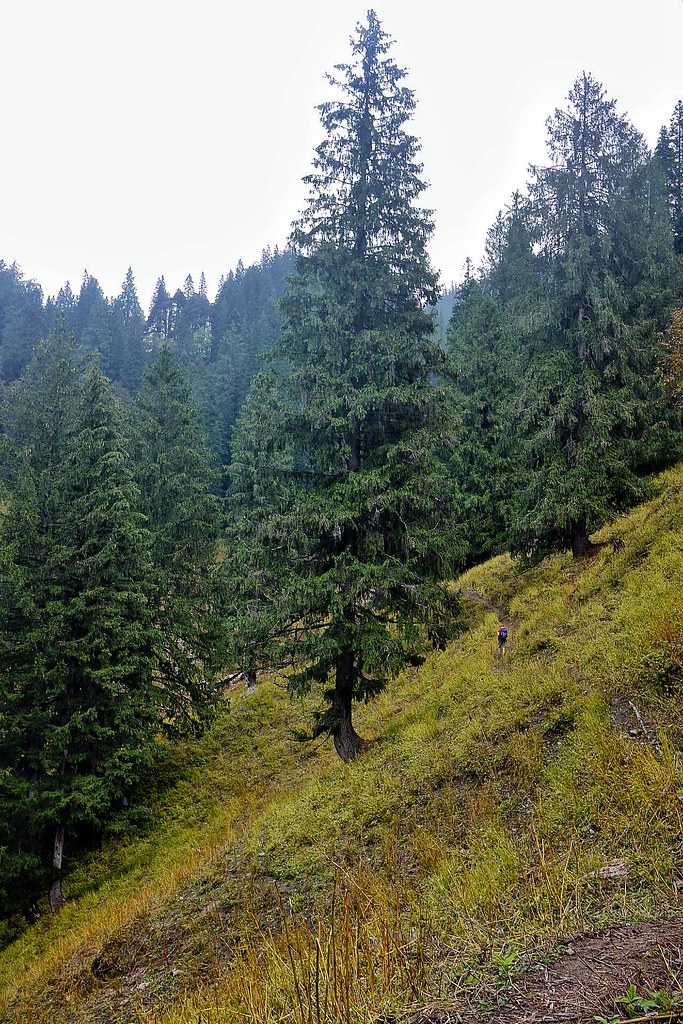 There are some great views back to Old Manali and the Beas River, as the sun casts its rays on the backpackers ghetto. 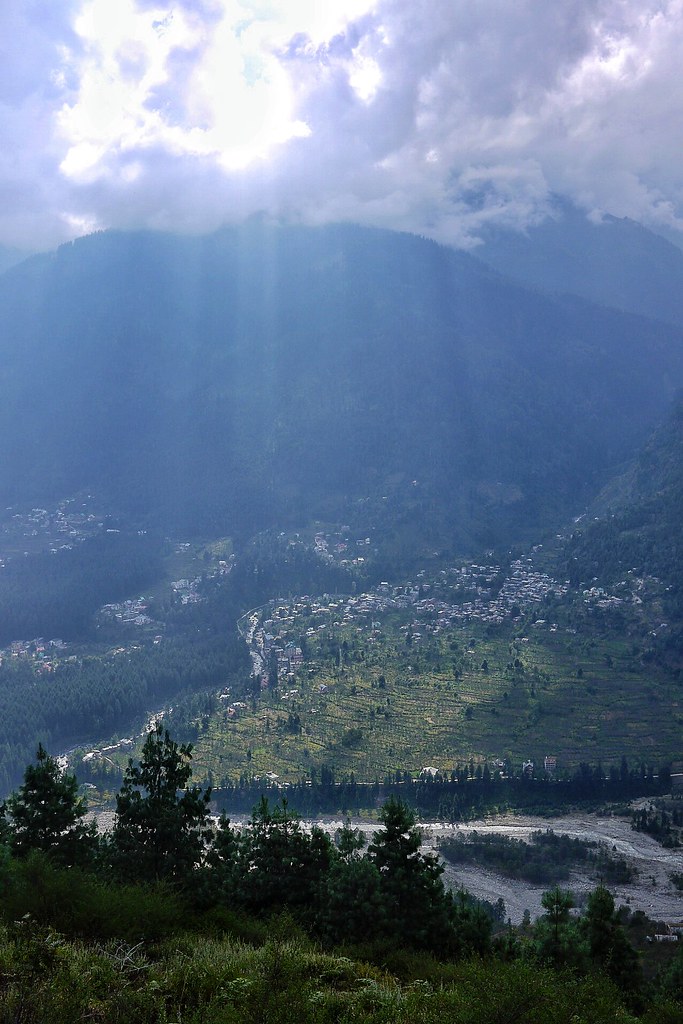 Spectacular cragging and bouldering potential which is slowly being opened up scattered amongst the farmers fields. 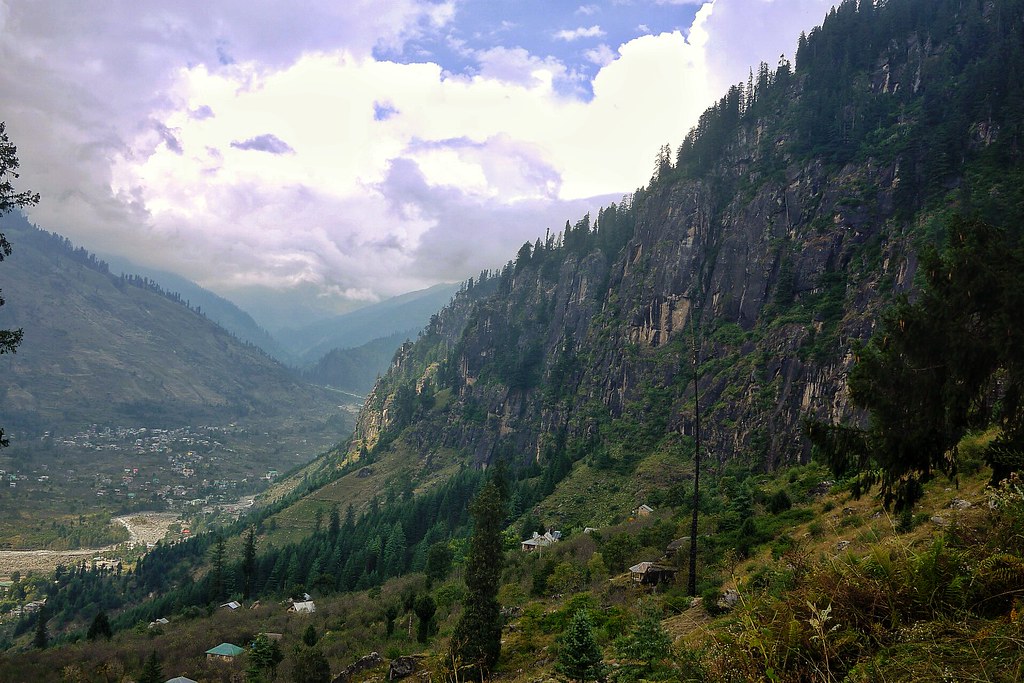 As one parcel arrives another leaves the UK care of the ever supportive Shona and Rich at Keep Pedalling with 4 days to kill before its arrival in Delhi. With a sigh of relief I head to McLeod Ganj before heading south.